Reporting current news on the Muppets

The Newsman has always had difficulty trying to get his news reports right, such as an interview or a story. In the first season, interviews were given from characters played by the guest stars. Throughout the rest of his career, the Newsman has been through painful events such as things coming right at him. For example, as he was about to report a fishing season, a lot of fish rained down hard onto him. Even after so many years of suffering, the Newsman will not step down from the news.

Initially in scripts, he was called "Muppet Reporter". 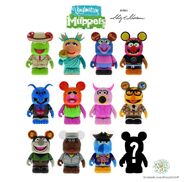 Add a photo to this gallery
Retrieved from "https://disney.fandom.com/wiki/The_Muppet_Newsman?oldid=4157828"
Community content is available under CC-BY-SA unless otherwise noted.