It's a Very Merry Muppet Christmas Movie
The Muppets

The Muppet Theater is the setting for The Muppet Show—a grand old vaudeville house that has seen better days. In episode 106, Kermit identifies the name of the theater as The Benny Vandergast Memorial Theater, although by the time of It's a Very Merry Muppet Christmas Movie, it is simply called "The Muppet Theater."

According to The Phantom of the Muppet Theater, the theater was built by a stage actor named John Stone in 1802. At some point a production of Hamlet ran in the theater, with Stone playing the title role. An alternate exterior is also shown in the book. The original exterior can be seen at the end of The Muppets Go to the Movies. It was renovated by the time of It's a Very Merry Muppet Christmas Movie.

Locations seen in the Muppet Theater are backstage right, the dressing rooms, the attic, the canteen, the prop room, the storage room, the boiler room, the stage, the house, the stage door lobby, and the back alley. In The Comic Muppet Book and Bo Saves the Show there is also a cellar where the monsters stay in.

Scooter's uncle J. P. Grosse owns the theater, and rents it to the Muppets, as Scooter is only too happy to remind Kermit. In a deleted scene from It's a Very Merry Muppet Christmas Movie, Kermit reveals that J.P. has passed away and left the theater to the Muppets. This would have taken place sometime after 1997, as J.P. can be seen (and referred to as such by the head of the KMUP network) in Muppets Tonight episode 102 and was last seen at KMUP in episode 206.

According to the events of It's a Very Merry Muppet Christmas Movie, as of December 24, 2002, the theater is an Official Historical Landmark. It can never be torn down nor changed. It will always remain the Muppet Theater, no matter who owns it.

In the 2011 film, The Muppets, the Muppet Theatre is located on Hollywood Boulevard in Hollywood, Los Angeles, California, in between Disney's Soda Fountain and Studio Store and the Jimmy Kimmel Live! studio, next to Muppet Studios. By the time of the events of the film, the theater and nearby studio have sat unused, mostly abandoned and derelict for many years. Upon finding out that greedy oil baron Tex Richman plans to purchase the site and raze it in order to drill for oil, the Muppets organize a telethon to save the property.

The Muppet Theatre was "portrayed" by the El Capitan Theatre, a 1926 movie palace owned by The Walt Disney Company. The El Capitan is frequently used for premieres of Disney films, including The Muppets. The theater's marquee was modified in post production. The adjacent Muppet Studios were actually filmed at Jim Henson Studios, which are, in reality, several blocks away from the El Capitan Theatre. 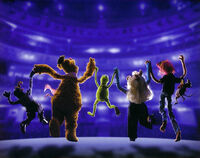 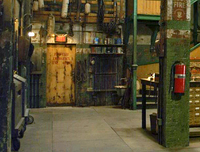 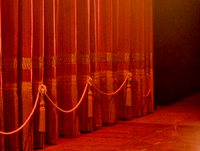 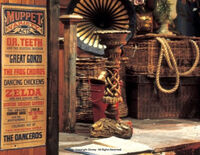