Start a Wiki
watch 02:02
Disney's 'The Nutcracker and the Four Realms' - Final Trailer
Do you like this video?

In London, England one Christmas Eve, Benjamin Stahlbaum gives his children, Louise, Clara, and Fritz, Christmas presents to fulfill his wife Marie's dying wish. Clara receives a handcrafted egg-shaped box, which she is unable to unlock. In the package, she discovers a note from Marie that states that the inside of the egg is all she would ever need. The family then heads to a Christmas Eve ball, hosted by the children's godfather and skilled engineer, Drosselmeyer. Refusing to dance with Benjamin, Clara scurries from the crowd to ask Drosselmeyer how to unlock her egg. He then reveals to her that it was a creation of his that he gifted to Marie when she was younger, and that her wish was to bestow the gift to Clara.

Returning to the ballroom, Clara gets scolded by Benjamin for not dancing with him. She calls him self-absorbed and obsessed with his family's image since Marie's passing, after which Drosselmeyer announces it being time for the children to receive their gifts. Clara finds a string with her name on it, signifying her gift, and follows it into a forest in a parallel world where she sees the key. Before she can grab it, a mouse snatches it. Unable to reach him, who crosses a frozen lake, Clara approaches Captain Phillip Hoffman. He leads her across the bridge into the Fourth Realm, but they are unable to obtain the key from the mouse. He then guides her to the palace, where she meets three regents of each land. They tell her that they are at war with the Land of Amusements which they now refer to as "the Fourth Realm".

Watching a ballet that tells the story of their world's creation, the Sugar Plum Fairy, regent of the Land of Sweets, explains to Clara that Marie created this world as a young girl. She later explains that Marie animated everyone with a machine that can turn toys into real-life people. The Sugar Plum Fairy says that she can use it to defend the other three realms against Mother Ginger, the Regent of the Fourth Realm, but it needs a key. Clara notices that its keyhole matches that of the one on her egg. Clara and her soldiers head towards Mother Ginger and steal the key the mouse had snatched. However, she is disappointed upon discovering that the egg is only a music box.

Once the Sugar Plum Fairy obtains the key, she uses the machine to turn toy soldiers into life-size ones that obey her every command, including the one to attack the Fourth Realm. She reveals that the machine can turn this world's people back into toys as well, and intends that to be the other regents' fate, revealing she had lied about Mother Ginger who, with her people, only resisted against the Sugar Plum Fairy's plan. Clara resists, and the Sugar Plum Fairy imprisons her, Phillip, Shiver, and Hawthorne.

Thanked for restoring peace among the Realms, Clara promises to visit them in the future and returns back to London, where time has hardly passed since she left. She then approaches Benjamin, apologizes for her earlier behavior, and asks him to dance. He accepts, and she opens her music box when he becomes emotional, as the song that plays was the first song that he and Marie had ever danced to. They then continue to dance throughout the night.

Disney is developing a live-action adaptation titled The Nutcracker and the Four Realms, Lasse Hallström would direct and Mark Gordon would produce from a script by Ashleigh Powell.[1]

On July 15, 2017, it was confirmed at the D23 Expo that Mackenzie Foy would play Clara, a young girl who gets transported into a magical world. Keira Knightley was cast as the Sugar Plum Fairy, Helen Mirren would play Mother Ginger, and Morgan Freeman will portray Drosselmeyer. Ballerina Misty Copeland would play the Ballerina Princess.[2]

In December 2017, it was reported that Joe Johnston would helm 32 days of reshoots, scripted by Tom McCarthy, due to Hallström being unavailable but will still oversee post-production, which was later revealed that Hallström and Johnston had voluntarily decided to receive a joint directorial credit for the film.

The fil has received an approval rating of 32% based on 197 reviews on the review aggregator website Rotten Tomatoes with an average rating of 5.14/10. The website's critical consensus reads, "Lacking a transporting yuletide story or dazzling dance routines, The Nutcracker and the Four Realms is a hollow holiday confection that's lovely to look at - and easy to forget." On Metacritic, it has a weighted average score of 39 out of 100, based on 33 critics, indicating "generally unfavorable reviews". Audiences polled by CinemaScore gave it an average grade of "B+" on an A+ to F scale, while PostTrak reported filmgoers gave it 3 out of 5 stars and a 49% "definite recommend".

David Ehrlich of IndieWire gave the film a grade of "D+", calling it "empty but eye-popping", writing "Watching a visually spectacular but virtually soulless new family movie like The Nutcracker and the Four Realms, it's tempting to wonder if such eye-popping dreck has any hope of sticking with impressionable young audiences. Is there any chance that the kids of today might be nostalgic for this hyper-saturated nonsense tomorrow?" Alonso Duralde of TheWrap also gave it a negative review, writing "The 'child travels to a magical land and learns things' trope has been the basis of many beloved stories, from The Wizard of Oz to The Phantom Tollbooth to The Chronicles of Narnia. But it's not a foolproof device, particularly when the magical land in question never makes much narrative sense; besides, how can the Four Realms be magical when the London where Clara already lives is so obviously a cartoon? Both the 'real' world and the fake one are ugly, overdone, and lacking any visual connection to gravity let alone reality."

The Disney Wiki has a collection of images and media related to The Nutcracker and the Four Realms. 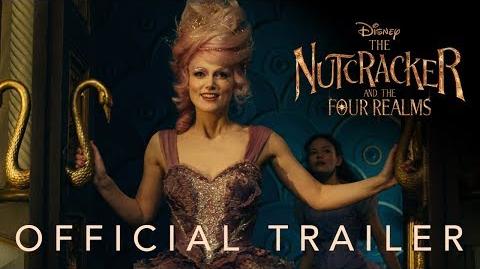 Disney's The Nutcracker and the Four Realms - Teaser Trailer 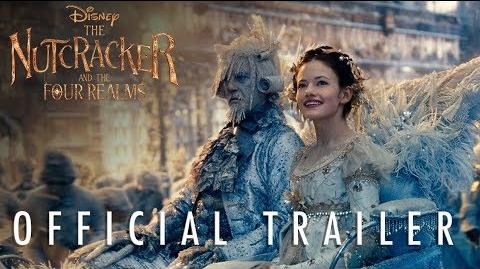 The Nutcracker and The Four Realms - Official Trailer 2 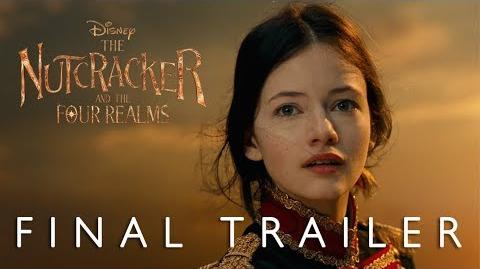 Disney's The Nutcracker and the Four Realms - Final Trailer 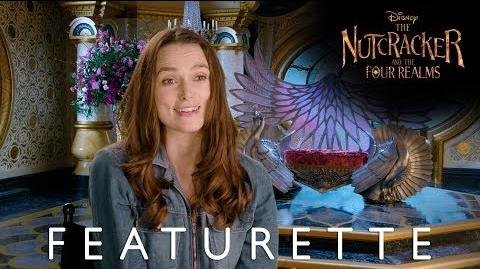 Disney's The Nutcracker and the Four Realms "Crafting the Realms" Featurette 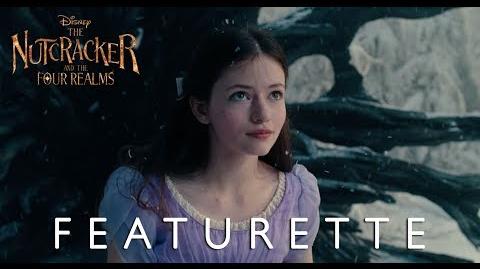 Disney's The Nutcracker and the Four Realms "Newest Member" Featurette 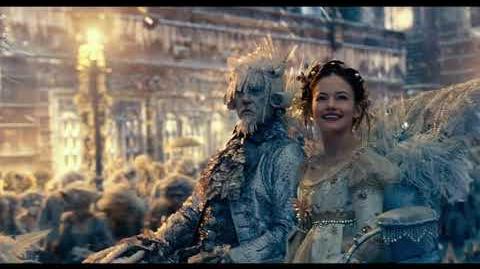 Disney's The Nutcracker and The Four Realms - "Unique" TV Spot 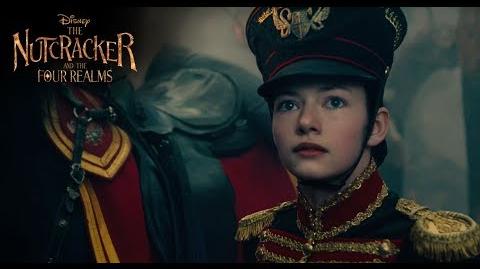 Disney's The Nutcracker and the Four Realms - Imagination 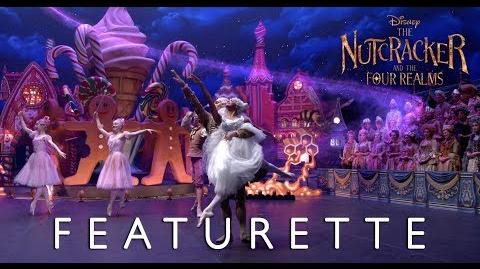 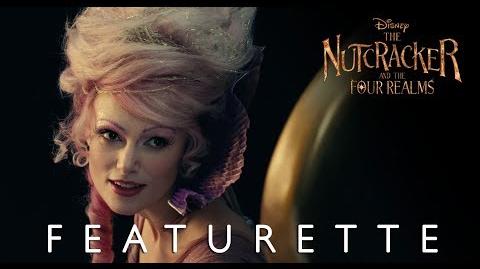 Disney's The Nutcracker and the Four Realms - "Family Traditions" Featurette 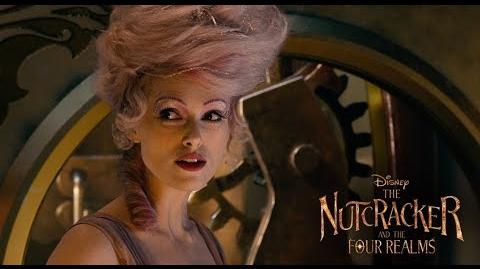 Disney's The Nutcracker and the Four Realms - Journey 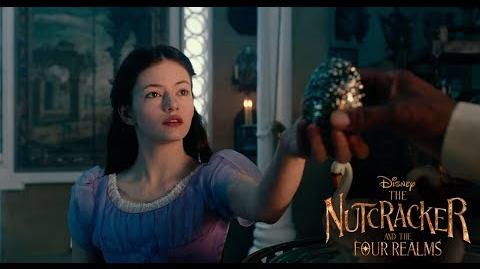 Disney's The Nutcracker and the Four Realms - Pedigree Event 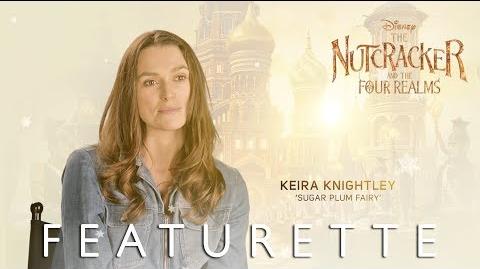 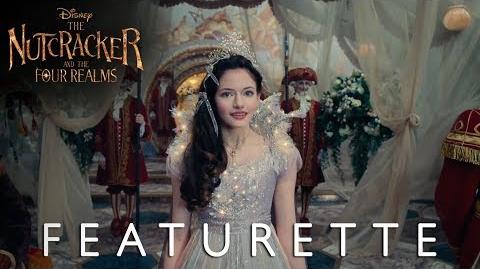 Retrieved from "https://disney.fandom.com/wiki/The_Nutcracker_and_the_Four_Realms?oldid=4211012"
Community content is available under CC-BY-SA unless otherwise noted.