The Avengers
Guardians of the Galaxy

“The Tesseract has awakened. It is on a little world, a human world. They would wield its power, but our ally knows its workings as they never will. He is ready to lead, and our force, our Chitauri, will follow. A world will be his, the universe yours. And the humans, what can they do but burn?”
―The Other[src]

The Other is a Marvel Comics character who appears in Marvel Cinematic Universe film The Avengers and reappears in Guardians of the Galaxy. He is a servant of Thanos who provides Loki with the Chitauri and is killed by Ronan the Accuser.

The Other is a diminutive, hooded figure wearing a decorative cloak. His flesh is blue and gaunt, with long fingers and small, round yellow eyes with small black pupils reminiscent of a hawk.

The Other's personality is mysterious and arguably under-developed, what is known is that he is extremely loyal to Thanos, has a high vocabulary, and is good at mimicry and intimidation. He considers humans "cowering wretches" and the might of planet Earth "meager".

The Other possessed super speed, which he used to help him intimidate Loki.

The Other serves Thanos, who is helping Loki Laufeyson. When Loki has arrived on Earth, Thanos is contacted by him, and after Loki successfully swipes the Scepter, the Other threatens the God of Mischief, declaring that if he fails in defeating the Earthlings, Thanos will make him know a new kind of suffering.

When eventually Loki is defeated, the Other complains to Thanos that the Earth's inhabitants are not as weak as they were supposed to be, he declares that challenging the Earth's heroes would be to court Death. To this, Thanos simply smiles.

The Other still serves Thanos, who has enlisted the aid of Ronan, Korath and Nebula to find the Orb. Thanos promised Ronan that he will help Ronan destroy Xandar in exchange for his services.

When Gamora is captured by the Nova Corps, The Other communicates with Ronan to inform him Thanos wants to have a meeting with him. Already in the Sanctuary of Thanos, Ronan blames Gamora for the loss but The Other disagrees and blames him, Ronan, tired of being bossed around by both Thanos and the Other, eventually snaps the Other's neck, killing him. 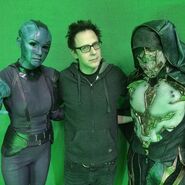