The Parent Trap is a 1961 Disney feature film starring Hayley Mills, Maureen O'Hara, and Brian Keith in a story about teenage twins and their divorced parents. It was based upon the book Lottie and Lisa (Das Doppelte Lottchen) by Erich Kästner. It was nominated for two Academy Awards, was broadcast on television, saw three television sequels, was remade in 1998 with Lindsay Lohan (in her feature film debut), and has been released numerous times on both VHS and DVD formats. The original film was Mills' second of six films for Disney. Disney also authorized the three made-for-TV sequels, all starring Mills: The Parent Trap II, The Parent Trap III, and The Parent Trap IV: Hawaiian Honeymoon.

Identical twins Susan Evers and Sharon McKendrick (Mills) meet at Camp Inch, a girls-only summer camp, unaware they are twin sisters. Their identical appearance initially creates a rivalry between them, and they continually pull pranks on one another. Eventually, their mischief comes to an end when it ruins the camp dance, and they stop fighting on the floor in shock when they see the mess they caused as a result. Then, the head counselor Miss Inch (Ruth McDevitt) refers to them as “little wretches” after a chocolate cake falls onto her face, causing Susan and Sharon to realize that they’re both in trouble and that the prank war between them has gone too far. As punishment, the twins discover they must live together in an isolated cabin for the remainder of camp.

After they both admit to coming from broken homes, Susan and Sharon soon realize they are long lost twin sisters, and that their parents Mitch Evers (Keith) and Maggie McKendrick (O'Hara), divorced shortly after their birth, with each parent having custody of one of them. Both eager to meet the parent they never knew, the twins switch places. While Susan is in Boston masquerading as Sharon, Sharon goes to California pretending to be Susan.

Sharon calls Susan in Boston with news that their father is planning to marry a gold-digger, and their mother needs to be rushed to California to prevent the union. In Boston, Susan tells her mother the truth about the switched identities, and they fly there. With all four in California, the twins set about sabotaging their father’s marriage plans (with mild approval from their mother). His money-hungry and much-younger fiance, Vicky Robinson (Joanna Barnes), receives rude, mischievous treatment from the twins and some veiled cattiness from Maggie. One evening, they recreate their parents’ first date at an Italian restaurant with a gypsy violinist. They are gradually drawn together, though they quickly begin bickering over minor things and Vicky.

To delay Maggie's return to Boston with Sharon, the twins dress and talk alike so their parents are unable to tell them apart. They will reveal who is who only after everyone goes on the annual family camping trip. Mitch and Maggie reluctantly agree, but when Vicki objects to the plan, Maggie tricks her into taking her place.

The twins effect the coup de grace: Vicky spends her time swatting mosquitoes and being awakened in terror by two bear cubs licking the honey the twins put on her feet. Exasperated, Vicky angrily slaps one of the twins, which causes Mitch to have a new opinion of her, as well as see her for what she really is in the process. Mitch breaks up with Vicky, and he and Maggie rekindle their love for each other. They remarry in the final scene, with the twins in the wedding party.

The film originally called for only a few trick photography shots of Mills in scenes with herself; the bulk of the film was to be shot using a body double. When Walt Disney saw how seamless the processed shots were, he ordered the script reconfigured to include more of the special effect. He also wanted Mills to appear on camera as much as possible, knowing that she was having growth spurts during filming. The film was shot mostly at various locales in California. The summer camp scenes were filmed at Cedar Lake Camp, in the San Bernardino Mountains near the city of Big Bear Lake in Southern California. The Monterrey scenes were filmed in various California locations, including millionaire Stuyvesant Fish's 5200 acres (21 square kilometers) ranch in Carmel, Monterrey's Pebble Beach golf course. The scenes at the Monterrey house were shot at studio's Golden Oak Ranch in Placerita Canyon, where Mitch's ranch was built. It was the design of this set that proved the most popular, and to this day the Walt Disney Archives receives requests for plans of the home's interior design. Of course, there never was such a house; the set was simply various rooms built on a sound stage. Camp Inch was based on a real girls' camp called Camp Crestridge for Girls at the Ridgecrest Baptist Conference Center near Asheville, North Carolina.

The Sherman Brothers provided the songs, which, besides the title song "The Parent Trap", includes "For Now, For Always", and "Let's Get Together". The latter (sung by Annette Funicello) is heard playing from a record player at the summer camp; it is reprised by the twins when they restage their parents' first date. The title song was performed by Tommy Sands and Funicello, who were both on the studio lot shooting Babes in Toyland at the time.

The film was nominated for two Academy Awards: one for Sound by Robert O. Cook, and the other for Film Editing by Philip W. Anderson.

The film was theatrically re-released in 1968. The Disney Studios produced three television sequels The Parent Trap II (1986), The Parent Trap III (1989), and The Parent Trap IV: Hawaiian Honeymoon (1989). In 1963, the ABC television sitcom The Patty Duke Show debuted using similar filming techniques in a series about teenage cousins (played by Patty Duke) with identical twin appearances but with completely different personalities. The film was remade in 1998 starring Lindsay Lohan. In 1965, a similar Tamil film called Kuzhandaiyum Deivamum starring Kutty Padmini released, which was later remade into Telugu as Letha Manasulu and in Hindi as Do Kaliyaan starring Neetu Singh in the double role. 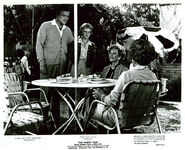 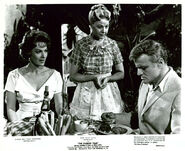 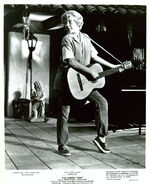 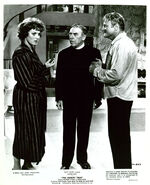 Retrieved from "https://disney.fandom.com/wiki/The_Parent_Trap?oldid=3928137"
Community content is available under CC-BY-SA unless otherwise noted.