"The Rite of Spring"

“The symphony that Beethoven called the Pastoral, his sixth, is one of the few pieces of music he ever wrote that tells something like a definite story.”
―Deems Taylor[src]

Ludwig van Beethoven's Symphony No. 6 in F major, Op. 68, also known as The Pastoral Symphony, is the fifth segment of Fantasia. It utilized delicate color styling to depict a mythical ancient Greek world of centaurs, families of Pegasus, the Gods of Mount Olympus, fauns, cupids, and other legendary creatures and characters of classical mythology. It tells the story of the mythological creatures gathering for a festival to honor Bacchus, the god of wine riding his horned donkey, Jacchus; the bacchanal is disturbed by Zeus, who decides to have a little fun by throwing lightning bolts at the attendees. 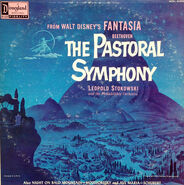 Retrieved from "https://disney.fandom.com/wiki/The_Pastoral_Symphony?oldid=3835203"
Community content is available under CC-BY-SA unless otherwise noted.