To keep Melanie in the manor forever

Being rich, his daughter

Legends, myths, his daughter leaving Thunder Mesa with her fiancé

Dies in an earthquake but roams on as a ghost

"Welcome, curious friends. You may not believe it, but beauty once lived in this house. And beauty lives here still."
"(evil laughter)"
The Phantom is the main antagonist of Phantom Manor. In life, he was known as "Henry Ravenswood" and is the father of Melanie Ravenswood.

Thunder Mesa was founded in 1849 when Henry Ravenswood, a Western settler, discovered gold in Big Thunder Mountain. Soon thereafter, he built a grand Victorian manor high on Boot Hill. However, the natives warned Henry and his employees at the Big Thunder Mining Co. that the Mountain was cursed by an evil spirit and that if they worked any longer in the mines, something bad would happen. Ravenswood, ignoring the warnings of the legend, continued to work in the mines.

Years later, Melanie fell in love with a train engineer and became engaged to him, making plans to leave Thunder Mesa to be with him. Henry became furious and did everything he could to prevent this from happening. However, in 1860, an earthquake shook the whole town and many people were killed, including Henry and his wife Martha. Some people claim that it was the spirit of the mountain who caused this tragic accident, others claim it was pure mother nature.

A few months later, Melanie was getting ready for her wedding, but her groom never showed up. She waited many hours, but he never came. Guests started to leave and Melanie kept telling the butlers and maids that he would come.

According to the legend, it is said that after Henry died, he lured her suitor to the attic, where he hanged him. To this day, it is said that the phantom still haunts the house and Melanie (now a ghost) continues to wait for her long lost love.

Henry Ravenswood was developed as part of an effort to unify the story of Disneyland Paris's Frontierland, making him both the owner of the Big Thunder Mining Company and Phantom Manor. Early drafts of the story had Henry co-owning the mine with his level-headed brother Arthur, and being a bullying womanizing scoundrel at odds with his family. He wasted much of the Ravenswood fortune on frivolous spending and died inside Big Thunder during the earthquake when inspecting the mine. Between this and Arthur's declining health, Ravenswood Manor would fall into ruin.

The Phantom's identity had been treated as ambiguous for a long time with the Henry Ravenswood's spirit story being presented in tandem with a story of the Phantom being a random dark spirit that arbitrarily chose to ruin the wedding. This alternative characterization was primarily used by Disneyland Paris's Entertainment division and treated the Phantom as a more direct "Phantom of the Opera" figure with a romantic interest in Melanie.

As part of the 2019 refurbishment to the attraction, the Phantom's identity as Henry Ravenswood would be made more clear with the introduction of new artwork and an expanded story telling of how Henry orchestrated the deaths of several other gentlemen courting his daughter before the final earthquake incident.

The Phantom appeared in the "Grim Grinning Ghosts" segment of Let's Go to Disneyland Paris. He appears alongside Melanie Ravenswood and other Disney Villains. He, alongside the other villains, are frightened away by Donald Duck dressed as a ghost.

In the attraction Phantom Manor, The Phantom takes over the role of the Ghost Host from the American Haunted Mansion attractions, acting as narrator while also appearing in person several times through the attraction itself.

The Phantoms presence is first made aware just inside the gates of the attraction, where a plaque states "The Phantom Awaits". His next appearance is when his voice becomes audible, welcoming the guests as they enter through the front doors of the manor. He talks about the beauty that once lived in the house, and how it still remains, before ushering the guests into a portrait room. As he comments about how the guests should try and find a way out, as the room stretches, lightening strikes, and the Phantom, a skull faced man is visible from the rafters, hanging the groom.

After the guests exit the stretching room, the Phantom bids his farewell to them, and promises to "meet up at the party". The Phantom is next seen in the manor's conservatory only as a shadow, invisibly playing the piano. He is later seen in the ballroom, standing in a shattered window obscured by darkness, laughing at the crying bride.

A few rooms later, He makes himself fully clear to the guests, as a skeleton faced man. He is standing outside the window of the Brides Boudoir, with a grave he dug, for the guests to fall down into. The Phantom is next seen laughing and gesturing to the coffin of his daughter, the bride, Melanie Ravenswood. He is finally seen as the Doom-Buggies glide past a window, with the face of the Phantom looming over the guests, before finally disappearing.

He appears one last time outside the ride, staring down at the visitors from a window on the second floor of the manor. 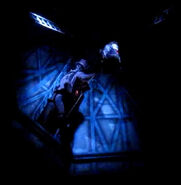 Retrieved from "https://disney.fandom.com/wiki/The_Phantom?oldid=3827044"
Community content is available under CC-BY-SA unless otherwise noted.