The Playhouse is an unofficial name given to the main continuity strand on Playhouse Disney blocks and channels outside North America between 1999 and 2006. It was set in a colourful house which was the channel's central framing location, occupied mainly by the channel's two main presenters (Big Dave and Little Alex in the United Kingdom).

Every day of the week, the continuity for that day would have a different theme (a few such examples including Post Day, Bug Day and Shape Day). Dave and Alex would open the Playhouse every day introducing the theme of the day, and then sing their opening number; Come Into Playhouse Disney. Throughout the day they would create arts and crafts, sing songs and do various other activities based on that day's theme. From 2002 onwards they would be joined by the puppet Monty Mole (puppeteered by Neil Sterenberg).

The Playhouse was complemented with several shorter segments throughout the day. The first of these was Art Play presented by Sara-Louise Harper, where she would show children how to make a piece of artwork based on a Disney movie (in one episode she made a replica of Aladdin's Magic Carpet). After Harper became pregnant and left in 2002, she was replaced with Olivia Bonnici and a puppet called Splodge, made of everyday DIY objects.

The second segment was Circle Time, presented by Jason Canning, where he and a group of children would make up a story from pictures that viewers sent in. This segment was eventually dropped when Canning left to pursue other work in 2003.

Up until 2004, Dave and Alex would also celebrate viewers' birthdays; the Playhouse Disney Postman (Phil Gallagher) would bring viewers' birthday cards, the talking animatronic birthday cake Victoria Sponge would then sing 'If Today Is Your Birthday'. The talking gargoyles Uncle Charlie and Auntie Rosie would read cards or viewer-sent pictures on Dave and Alex's behalf while their attention was turned.

At the end of the day, Dave and Alex would close down the Playhouse with 'See You Soon Inside Playhouse Disney', which remained unaltered throughout the strand's run.

After the channel's format was refreshed in April 2004, the Playhouse remained largely unaltered, albeit with an increased reliance on out-of-vision continuity, and removing The Playhouse Disney Postman, Victora Sponge, and Circle Time segments with the presenting role of "Art Play" was taken by Olivia Bonnici after Sara-Louise Harper left after becoming pregnant. The strand also finished at around 5:55pm from 2004 onwards due to the introduction of the PJ's Bedtime nighttime block. The strand was eventually abandoned altogether on August 27, 2006, due to budget cuts across all four Disney Channels, marking the beginning of Playhouse Disney UK's transition to a more American format of presentation.

Outside the United Kingdom, the format's life varied, For example in Spain, Latin America, Mexico, Brazil, and Australia, the format was not removed at least until 2007 and 2008. 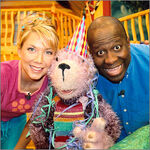 UK presenters Big Dave and Little Alex with Monty Mole at the middle.