The Gluttonous Pirate
The Buccaneer (2006 toy-line and vinylmation)

Captain Barbossa
The Crew of the Wicked Wench

“Here I be—holdin' the treasure map, and the key as well. What I wouldn't give to see the look on Cap'n Jack Sparrow's face when he hears tell 'tis only me what's got the goods, haha!”
―The Pooped Pirate

The Pooped Pirate also known as the Gluttonous Pirate or the Buccaneer is a character from Pirates of the Caribbean.

The Pooped Pirate was a gluttonous, greedy, and womanizing pirate who served as part of the crew of the Wicked Wench during the golden age of piracy in the early 18th century. The ship came to raid the colony of Puerto Dorado on the island of Isla Tesoro in search of a great treasure hidden by its officials. During this raid the Wench was competing for the treasure with Captain Jack Sparrow who the pooped pirate himself seemed to show an amenity with.

The pooped pirate was designed by Marc Davis, based on concept art which he had made of historic pirate John "Long Ben" Every (c 1643-1679). This art was created for back when Pirates of the Caribbean was intended to be a Madame Tussaud inspired wax-museum attraction featuring famous pirates. He gets the officially used moniker of the Pooped Pirate due to his visible exhaustion when encountered on the ride.

In the original incarnation version of Pirates of the Caribbean, he was shown holding a woman's undergarments rather than a map and made comments to guests about a woman he was pursuing as she hid in terror in the barrel behind him. The original scene was highly inappropriate, playing his attempts at sexual-assault for comedy and romanticizing said form of crimes. Due to this, the scene was altered in 1997 to simply have him eating food while a cat randomly popped out of a barrel behind him for no particular reason.

In 2006 the scene was changed yet-again when elements of the Pirates of The Caribbean films were being integrated into the ride. Said refurbished scene recycled the original gag of a hiding enemy in the barrel albeit with the new story of Jack Sparrow hunting treasure and additional gag of him studying the map.

The Pooped Pirate appears in the town of Puerto Dorado, speaking in the direction of guests as they pass by. He attempts to study his map while Jack Sparrow pops out of a barrel behind him. This causes a nearby dog to bark at Jack only for the pooped pirate to try and shut the dog up as he studies the map, oblivious to Jack Sparrow's presence.

During the treasure-room scene, the pirate's key can be seen inserted in the keyhole of the doors. The implication is that Jack took the key from the pooped pirate and managed to indulge in the treasures for himself.

An adaptation of the Pooped Pirate appears in the Puerto Dorado stage of the Pirates of the Caribbean mini-games within this video-game. The pirate here possesses the keys to the treasury hidden beneath the mayor of Puerto Dorado's mansion where Blackbeard stores his treasure. The player distracts him by doing dances and pirate imitations as their ally Black Barty hides in a barrel nearby and steals the pirate's keys.

The pooped pirate appears on Isla Tesoro as a ghost in this game. He reprises his role from the attraction where the player witnesses Jack hiding in a barrel behind him to rob. 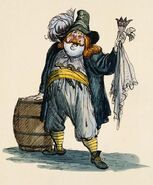 The original version of the scene