The film opens with Mia Thermopolis (Anne Hathaway), Crown Princess of Genovia, graduating from Princeton University's Woodrow Wilson School. We learn that she and Michael have broken up since he went on tour with his band. She and her best friend Lily are still in touch, whom is currently attending UC Berkeley. Mia's mom has married Mia's former teacher Mr. O'Connell and the two are expecting their first baby soon.

Mia, Joe (Héctor Elizondo), and Fat Louie fly to Genovia for Mia's 21st birthday and for her to take her grandmother, Clarisse Renaldi's (Julie Andrews) place as Queen of Genovia once Mia is ready. At her birthday ball, she has to dance with all the eligible bachelors. She accidentally steps on a mysterious young man's shoe and dances with him. When Mia's tiara falls off, Viscount Mabrey (John Rhys-Davies) catches it and it is revealed that he's planning to steal her royal position but Mia brushes it aside.

Mia overhears the meeting between Parliament and the Queen. Viscount Mabrey mentions another heir to the crown, his nephew, Lord Devereaux (Chris Pine). Mia cannot be Queen unless she gets married in 30 days. Mia wants to marry for love, but agrees to an arranged marriage. Clarisse invites Lord Devereaux to stay at the palace. Mia is shocked when she sees he is the man she flirted at the ball, Lord Nicholas Devereaux, so she angrily stomps on his foot and runs off.

Mia is joined with her best friend Lily Moscovitz (Heather Matarazzo) while touring her new room and later they search the possible husband. Several of the choices are either not right or not the right age, after a while Mia chooses Andrew Jacoby (Callum Blue), Duke of Kenilworth. The two hit it off after a trip to the beach and days later they are engaged. Mabrey and Nicholas get upset with the engagement, and plot against it. Nicholas starts flirting with Mia and initially is glad that the plan was working.

Mia starts to practice firing a flaming arrow as part of the ceremonies for when she is crowned Queen, but she is useless at archery. At a garden party, Mia gets annoyed seeing Nicholas with Lady Elissa. They argue near an isolated fountain and Nicholas suddenly kisses Mia, after she realizes his plan (right before they both fall into the fountain). After that Nicholas gets second thoughts about stealing the crown and Mabrey realises that Nicholas has fallen in love with Mia. During the parade Mia notices the children watching the parade who are all orphans. She then gets out of the carriage and has the children join the parade. With the wedding getting closer, Mia holds a bridal shower slumber party for all the princesses around the world, complete with snacks, mattress surfing, and music. After coming back with Maurice the poodle, the Queen gets in on the fun.

Mia is again practicing archery when Nicholas tells her that he's leaving, but he wants to meet Mia for the last time. Mia is upset, but agrees to meet him. Later Nicholas throws stones at Mia's window. Addressing her as Rapunzel, he asks her to climb down the vine. They go to the lake and dance and fall asleep. When they wake up, Mia sees a man in a boat videotaping them. Mia thinks Nicholas set her up and storms off. When she gets back home, the video has already been broadcast on TV. She apologizes to the disappointed Andrew, and he kisses her and both realize they don't love each other, but agree to marry for Genovia's sake.

Mia's mom and stepdad come for the wedding with Mia's new baby half-brother, Trevor. Meanwhile, Nicholas is debating on whether he should go to the wedding. Mabrey leaves to the wedding and Gretchen tells him that his uncle set up what happened at the lake. Nicholas leaves for the ceremony on his grandfather's penny-farthing bike, the only means of wheeled travel available (although he subsequently swaps the bike with a shepherd for his horse).

Meanwhile Mia is walking down the aisle, but runs out realizing she can't marry Andrew. Clarisse goes after her and tells her not to make the same mistake she did and give up finding love (she's obviously talking about Joe). Mia walks back inside, saying she wants to become Queen without a husband as her grandmother had done just fine as Queen without a husband, but Mabrey says his nephew should be King. Nicholas declines the crown, Parliament votes and the law is changed. Clarisse asks Joe for his hand in marriage and they get married as there is already a wedding prepared.

Mia successfully shoots a flaming arrow through the Coronation ring. The day of her coronation Nicholas comes in and reveals that he is in love with her, she admits it too and they share a passionate kiss. Mia is crowned Queen of Genovia in the coronation ceremony in the palace.

The first movie - though sporting many different characters, differences in character and overall changes - was essentially the first Princess Diaries book, with the third Princess Diaries book's ending. The second movie was completely alternate from Meg Cabot's novels. Notable changes include: 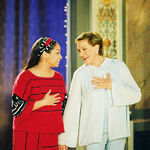 joe mama said this page is way too much to read