Cinderella III: A Twist in Time (portraits only)
Cinderella (2015) (mentioned)

Prince Charming (son)
The Queen is a minor character in the 2007 Disney animated film Cinderella III: A Twist in Time.

She was a very good and warm-hearted Queen, beloved by her subjects. She and her husband were very much in love, he keeps portraits of her in many rooms of the castle and keeps her most prized possession: a shell. Her son, the Prince, has a lot of respect for his mother and was always following her advice, since the two resembled each other, both physically and emotionally by both being devoted to loved ones and accepting of those lower in status. The King sees his wife in Anastasia because like the Queen, she doesn't know how to dance, and he also believes she is a good and kind person, a statement which makes Anastasia change her ways.

She has fair skin, thick long red hair with white streaks on each side and tied in several ringlets, green eyes, and wears a pink dress. However, in the live-action remake, her hair is dark brown.

The Queen was the mother of Prince Charming, the wife of the King and, in theory, the mother-in-law of Cinderella. She was the Queen of the kingdom and died before the events of Cinderella. Although she doesn't have a speaking role in the movie, she is constantly mentioned by her husband and son. However, she appears in a number of paintings. In the film, her love story with the king is a story that would change Anastasia's intentions and help the Prince realize that he is in love with Cinderella, so the Queen is an important character in the film. As shown in the paintings, the Queen bears quite a resemblance to Anastasia.

The Queen appears in her wedding dress in a portrait.

In the live-action remake, the King mentioned that the Queen was a princess before marrying him. She appears in a portrait at the end of the film. 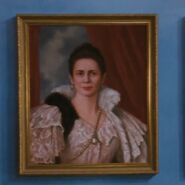 The Queen's portrait in Cinderella (2015)