Disney Wiki
Register
Don't have an account?
Sign In
Advertisement
in: Songs, Songs from The Muppets, Reprise,
and 9 more
English

The Muppets at Walt Disney World
the muppets.

This Is Me: Pride Celebration Spectacular

"The Rainbow Connection" is a song originally written for The Muppet Movie and was nominated for an Academy Award for Best Song in 1979. It is sung by Kermit the Frog as the movie's opening number and reprised by the whole cast of Muppets at the end of the movie, but with slightly different lyrics. The single of this song reached #25 on Billboard's "Hot 100 Singles" chart in 1979.

In The Muppets at Walt Disney World, a young Raven-Symoné sings the song to cheer up Kermit. It's also referenced later when Kermit tells Mickey Mouse that a saying the Muppets have is "Someday we'll find the rainbow connection, the lovers, the dreamers and me".

The song is referenced twice in the 2014 film Muppets Most Wanted. When the Muppet tour stops in Madrid, Constantine is shown scrolling through footage from The Muppet Show, Sesame Street, and other previous Muppet movies to study Kermit's mannerisms and voice to better impersonate him. Eventually, he comes across a snippet of the Muppet Movie version of the song. Because of Constantine's poor English, he misinterprets the line "the lovers, the dreamers, and me" as "the lovers, the dreamers, and cheese". Later, during the Interrogation Song, Constantine (still posing as Kermit) claims he sang "The Rainbow Connection" during the Berlin show.

It was sung by Kermit during the credits of the muppets. episode "Pig's in a Blackout".

Why are there so many songs about rainbows?
And what's on the other side?
Rainbows are visions, but only illusions
and rainbows have nothing to hide
So we've been told and some choose to believe it
I know they're wrong, wait and see

Who said that every wish would be heard and answered
when wished on the morning star?
Somebody thought of that and someone believed it
Look what it's done so far
What's so amazing that keeps us stargazing
And what do we think we might see?

Have you been half asleep? And have you heard voices?
I've heard them calling my name
Is this the sweet sound that calls the young sailors?
The voice might be one and the same
I've heard it too many times to ignore it
It's something that I'm suppose to be


In 2011's The Muppets, Fozzie Bear and the Moopets perform a rendition of the song with altered lyrics about the Pechoolo Casino.

Later on in the movie, the Muppets sing the regular version of the song as the final act of the Muppet Telethon, but they soon realize that they still have time for one more act.

Fozzie Bear:
Why are there such great deals on our hotel room?
And continental breakfast is free

The Moopets:
Breakfast is free

Fozzie Bear:
HBO in every room
And free gas if you check in after noon
Free parking for cars, not RVs

Fozzie Bear:
Our wedding chapel is 24 hours
No marriage certificate is needed

The Moopets:
No marriage certificate is needed

Fozzie Bear:
We're glad you found it, Pechoolo Casino
The owners, the Moopets and me
Cha cha cha

[spoken] Thank you! Thank you, you're a great audience! 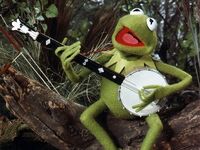