Headbutting, echoing
The Rams are minor characters in Brother Bear.

They are a pair of male Dall's sheep as their names suggest. Their appearances almost look the same, but their sizes differ. One is a bulky ram with thick horns while the other is a thin ram with thin horns.

They are first seen butting heads for a nearby ewe. When the bears greet them, one ram shouts, "What do you want?" which winds up being echoed. The rams start telling their own echo to shut up, resulting in a funny, nonstop argument. Koda then adds, "I think their horns are screwed on too tight," as he and Kenai leave to find the Salmon Run themselves. In an end credit scene, at nighttime, the rams finally end their argument as they get tired for good. 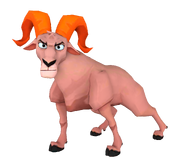