Disney Wiki
Register
Don't have an account?
Sign In
Advertisement
in: Characters, Villains, Phineas and Ferb characters,
and 6 more

A hotel outside of Danville, now in the Organization Without a Cool Acronym's prison

Everyone
The Regurgitator is a minor antagonist of the popular animated TV show, Phineas and Ferb. He is a villain that is set at high priority at the O.W.C.A. because he is supposedly more evil than Dr. Doofenshmirtz in the episode, Oh, There You Are, Perry.

Dr. Doofenshmirtz, however, begins having doubts when the Regurgitator says that he is not going to explain his plan to Perry before killing him. Feeling underappreciated, Dr. Doofenshmirtz tells him about all the things he's made for the Regurgitator, a pair of rocket boots to reach the files in his wall, and a self-destruction system for the lair that is already counting down. It turns out that Doofenshmirtz also builds a release button inside Perry's cage. Perry presses it, and escapes.

He also appears briefly in "Rollercoaster: The Musical!" with Kevin Destructicon.

The Regurgitator's cameo in Rollercoaster the Musical 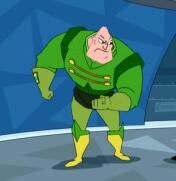