June 20, 1941
The Reluctant Dragon is a 1941 American live-action and animated film produced by Walt Disney, directed by Alfred Werker for live-action and Hamilton Luske for animation, and released by RKO Radio Pictures on June 20, 1941. Essentially a tour of the then-new Walt Disney Studios facility in Burbank, California, the film stars radio comedian Robert Benchley and many Disney staffers, such as Ward Kimball, Fred Moore, Norman Ferguson, Clarence Nash, and Walt Disney, all as themselves.

The first third of the film is in black-and-white, the remaining two-thirds are in Technicolor. Most of the film is live-action, with four short animated segments inserted into the running time: a black-and-white segment featuring Casey Junior from Dumbo; and three Technicolor cartoons: Baby Weems, Goofy's How to Ride a Horse, and the extended-length short, The Reluctant Dragon, based upon Kenneth Grahame's book of the same name. The total length of all animated parts is 40 minutes.

The loose plot of the film features Robert Benchley trying to find (or, rather, avoid finding) Walt Disney so that he can, at the insistence of his wife, pitch to him the idea of making an animated version of the book by Kenneth Grahame. Dodging an overly officious studio guide named Humphrey (played by Buddy Pepper), Benchley stumbles upon a number of the Disney studio operations and learns about the traditional animation process, some of the facets of which are explained by a staff employee named Doris (Frances Gifford).

The cartoon starts with an introduction by the narrator of the story. One of the main characters, The Boy, who is reading a book about knights and bloodthirsty dragons, is introduced. His father comes rushing by, claiming to have seen a monster. The Boy reassures his father that it was only a dragon, to which the father panics and runs to the village in fear.

The Boy then goes to the Dragon's lair, where he is confronted not by a ferocious beast, but a shy, poetry spouting creature. The Boy, though surprised at seeing what a nice creature the Dragon is, befriends him. When he arrives back at the village, the Boy discovers that Sir Giles the Dragon slayer has arrived. He runs to tell the Dragon that he should fight him, only to be left disappointed when the Dragon announces that he never fights. The Boy visits Sir Giles, and it is revealed that Sir Giles is an old man. The Boy tells Sir Giles that the Dragon will never fight and they decide to visit him.

Inside his cave, the Dragon is too scared to fight and cannot breathe fire. An insult from the Boy leads to the Dragon getting angry and eventually spitting flames. The Dragon jumps for joy as he is now ferocious. The fight ensues, with Sir Giles chasing the Dragon around with his sword and into the cave, where they drink tea and make noises to make it seem they are fighting. Out in the open, they charge at each other, creating an enormous cloud. Inside they dance, and Sir Giles reveals that it is time for the Dragon to be slain, but only for pretend, to which the Dragon gets excited. Sir Giles places his lance under the Dragon's arm, then the Dragon jumps out of the cloud and performs a dramatic death scene. The story ends with the Dragon being accepted into society, to which the Dragon recites a poem:

"I promise not to rant or roar, and scourge the countryside anymore!"

The film was released in the middle of the Disney animators' strike of 1941. Strikers picketed the film's premiere with signs that attacked Disney for unfair business practices, low pay, lack of recognition, and favoritism. At one theater, sympathizers paraded down the street wearing a "dragon costume bearing the legend 'The Reluctant Disney'". Critics and audiences were put off by the fact that the film was not a new Disney animated feature in the vein of Snow White and the Seven Dwarfs or Pinocchio, but essentially a collection of four short cartoons and various live-action vignettes. The Reluctant Dragon cost $600,000 to make, but only returned $400,000 from the box office, hence the film failed at the box office. 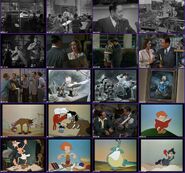 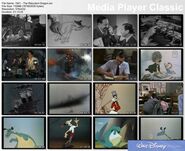