The Rescuers
The Little Mermaid

Beauty and the Beast
The Rescuers Down Under is an American animated film produced by Walt Disney Feature Animation and first released by Walt Disney Pictures and Buena Vista Pictures Distribution on November 16, 1990. The 29th film in the Disney Animated Canon, the film is the sequel (Disney's second for an animated feature) to the 1977 animated classic The Rescuers, which was based on the novels by Margery Sharp. This film, The Three Caballeros, Fantasia 2000, and Winnie the Pooh are the only Disney sequels that are part of the Disney Animated Canon, until Ralph Breaks the Internet and Frozen II, as they were all produced by Walt Disney Animation Studios. The film takes place in the Australian Outback and belongs to the era known as the Disney Renaissance (1989-1999), which began with The Little Mermaid the year before this sequel was released. It was also the second Disney sequel to have been shown in theaters. The biggest reason this failed at the box office was because it was released around the same time as Home Alone (which also had the late John Candy), Rocky V, and Edward Scissorhands (Home and Edward were ironically purchased by Disney when they purchased 20th Century Studios (then called Fox)). Disney would not return to producing animated features without including musical numbers in the canon until the early 2000's.

The film is known as Bernard and Bianca in the Land of the Kangaroos in countries where the phrase "Down Under" is not as well known or is deemed as offensive. It also became the first fully digital feature film for Disney and the world.

Another Rescuers movie was planned for 1996 but after the deaths of Eva Gabor and John Candy, this and all future Rescuers movies were scrapped. Also, the disappointing box-office performance of the film discouraged the Walt Disney Company from releasing later sequels theatrically, with the exception of Return to Neverland and The Jungle Book 2, both of which proved to be box office successes.

One morning in the Australian outback, a young boy named Cody is told by his friend, a kangaroo called Faloo, about a trapped Great Golden Eagle called Marahute, who is trapped on top of a cliff and that he is the only one who can set her free. Faloo takes Cody to the cliff and remains below as Cody climbs up to help Marahute. After climbing the cliff, Cody rescues the eagle by cutting the ropes keeping her restrained to the ground. In the process, he is accidentally knocked off the cliff, but Marahute swoops down and catches him on her back just before he hits the ground. Befriending Marahute, Cody is taken on a ride through the air before been taken to her nest, where he is shown her three eggs that are close to hatching, and given a feather by her as a token of gratitude for freeing her, also learning that Marahute is a widow, as her mate had been killed by poachers. Later, the boy falls in a pit-trap by wanted local poacher McLeach, who arrives on the scene in his highly-destructive half-track to capture his game. Finding Cody, he helps him out of the pit to and allows him to go free, until he notices the eagle's feather in the boy's backpack. McLeach is instantly drawn to it, for he knows that to capture such a grandiose bird would make him rich. After McLeach reveals that he was the one who killed Marahute's mate and demands Cody lead him to the eagle, the boy tries to flee, but McLeach catches up to him and tosses the boy's backpack into a river to make it look as if he was devoured by crocodiles when the Rangers come looking for him.

As McLeach drives back to his hideout with Cody, a message is sent to New York to the Rescue Aid Society headquarters at the United Nations, and Bernard and Bianca, the RAS's elite field agents, are assigned to the mission, interrupting Bernard's attempt to propose marriage to Bianca. They go to find Orville, the albatross who previously assisted them, but instead find Wilbur, Orville's brother. Bernard and Bianca convince Wilbur to fly them to Australia to save Cody. In Australia, they meet Jake, a kangaroo rat who is the RAS' local regional operative. Jake later flirts with Bianca, much to Bernard's chagrin. He serves as their guide and protector in search of the boy. Wilbur is immobilized when his spinal column is bent out of its natural shape, convincing Jake to consign him to the hospital.

Wilbur is taken to a wrecked ambulance where several medical mice “help” him with his back. They rope him and put him in a harness, which made Wilbur unsure about being left there. When Dr. Mouse orders the Nurse Mice to put a cane in his back, Wilbur begins to panic, even though the doctor tells him to relax, causing the head doctor to sedate him. Two nurse mice load two syringes with tranquilizer into a double-barreled shotgun and shoot him in the rear.

At McLeach's hideout, McLeach tries threatening Cody into revealing Marahute's location, at one point negotiating a fifty-fifty split between the money he would earn from her, but Cody refuses. This gets him thrown in a cage in a room with several of McLeach's captured animals. Cody and the animals attempt to get the keys to the door, but are thwarted by Joanna, McLeach's loyal pet goanna.

Back in the hospital truck, Wilbur wakes up to find his head secured in a vice and a heart monitor attached to his beak, much to his horror. Planning on performing an operation on Wilbur’s back, Dr. Mouse orders a set of forceps, sharp-toothed scissors, and a rusted spur to prepare himself for it, frightening Wilbur even further. When Dr. Mouse discovers the spur to be rusted tight, he orders for an “Epidermal Tissue Disruptor”, which turns out to be a chainsaw. Wilbur panics, breaks free, and runs for his life. The doctor and the nurses try to return him to the bed while Wilbur tries to escape through a window. As the mice try to pull him back in, he falls flat back into the ambulance and on top of Dr. Mouse. His back is suddenly straightened up, but the doctor’s back is damaged, and Wilbur sets out to find Bernard and Bianca.

Back at McLeach's hideout, he overhears the rangers talking over the radio about the missing Cody and call off the search for him. After realizing he still needs to get the eagle's location from the boy, McLeach decides to eat some eggs. Naturally, this excites Joanna, who sneaks away with a few of his eggs while McLeach tries to figure out a way to make Cody give up the eagle's location, much to his chagrin. When Joanna successfully steals all of McLeach's eggs, he suddenly realizes the eagle's eggs are Cody's weakness before he can beat her with his toolbox.

Meanwhile, one of McLeach's captive animals, a stir-crazy frill-necked lizard named Frank, accidentally escapes from his cage and snatches the keys, only to be chased by Joanna. McLeach arrives and throws Cody outside, telling him that over the radio, he heard that someone else had shot and killed Marahute instead of him. As Cody runs away, McLeach loudly tells Joanna that Marahute's eggs won't survive without her, which, as planned, inspires Cody to run off to the nest.

Bernard, Bianca, and Jake, half-aware of what is happening, jump onto McLeach's half-track to follow him. At Marahute's nest, the three mice try to warn Cody that he has been followed; just as they do, McLeach arrives and captures Cody, along with Marahute, Jake, and Bianca. Bernard is left stranded on the cliff, where he manages to protect the eggs from Joanna, whom McLeach lowers to the nest to eat said eggs, by swapping them out with smooth rocks. Wilbur then arrives at the nest, at which point Bernard convinces him to sit on the eagle's eggs.

As night falls, McLeach takes Cody and Marahute to Crocodile Falls, where he ties Cody up and uses his half-track's added crane to dangle him over the rapids where the eponymous crocodiles lie. Bernard, riding a type of wild pig called a "razorback", which he had tamed using a horse whispering technique earlier used by Jake, follows and disables McLeach's vehicle, preventing the use of its crane from putting Cody at risk. McLeach then tries to shoot the rope holding Cody above the water. To save Cody, Bernard tricks Joanna into ramming into McLeach, sending them both into the water. The crocodiles turn their attention from Cody to McLeach, while behind them, the damaged rope holding Cody finally snaps. Although McLeach manages to fight off the crocodiles, only Joanna reaches the shoreline while McLeach goes over a much larger waterfall to his death.

Bernard dives into the water to save Cody but fails. Jake and Bianca free Marahute in time to retrieve Cody and Bernard just when they begin to fall over the waterfall. Bernard, desperate to avoid any further incidents, proposes to marry Bianca, who accepts eagerly while Jake salutes him with newfound respect. All of them depart for Cody's home. Wilbur, whom they have neglected to relieve of his task, incubates the eggs until they hatch, much to his dismay.

The Rescuers Down Under is notable for Disney as its first traditionally-animated film to completely use the new computerized CAPS process. CAPS (Computer Animation Production System) was a computer-based production system developed by Pixar that was used for digital ink and paint and compositing. This allowed for a more efficient and sophisticated post-production of the Disney animated films and making the traditional practice of hand-painting cels obsolete. The animators' drawings and the background paintings were scanned into a computer, where the animation drawings are inked and painted by digital artists, and later combined with the scanned backgrounds in software that allows for camera positioning, camera movements, multiplane effects, and other techniques.

As a result, The Rescuers Down Under was the first feature film for which the entire final film elements were assembled and completed within a digital environment. However, the film's marketing approach did not call attention to the use of the CAPS process.[1] It is Disney's second animated feature that does not include any musical numbers, the first being Disney's The Black Cauldron. The film also uses CGI elements throughout such as the field of flowers in the opening sequence, McLeach's truck, and perspective shots of Wilbur flying above Sydney Opera House and New York City.

A team of over 415 artists and technicians were required for the production of the film. Five members of the team traveled to the Australian Outback to observe, take photographs and draw sketches to properly illustrate the outback on film.

On its initial release, The Rescuers Down Under was preceded by a short subject starring Mickey Mouse in an adaptation of The Prince and the Pauper, which was produced in hand-painted cel animation. This was the second new Mickey Mouse short made since the 1950s, the first having been Mickey's Christmas Carol, which accompanied the 1983 theatrical re-release of The Rescuers.

The Rescuers Down Under features three characters from the first film: Bianca, Bernard, and the Chairmouse.

The film received a mostly mixed response. On Rotten Tomatoes, 68% of the critics reviews were positive to negative. But despite the critical success, the film underperformed at the box-office, grossing only $47 million, making it an unsuccessful box-office performance of any major release of the Disney Renaissance era.

The staff of Halliwell's Film Guide gave it two stars out of four. "[This] slick, lively and enjoyable animated feature," they wrote, "[is] an improvement on the original."[2] 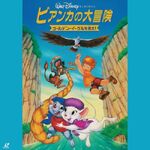