The whole score starts off with outer space at the start of the bassoon solo. We see the Milky Way coming out of the darkness. Comets, the sun, and shooting stars whiz by. We come down to a planet which is Earth being born. Light from the volcanoes light up and the volcanoes burst with lava. Then the volcanoes explode. Lava pours down from a volcano with rocks and hits the water, creating a storm and the sea to rise up, flooding the volcano and everything around. Then everything went silent. 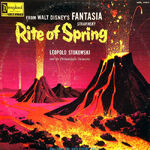 Retrieved from "https://disney.fandom.com/wiki/The_Rite_of_Spring?oldid=3569561"
Community content is available under CC-BY-SA unless otherwise noted.