What's better than a slumber party? A Royal Slumber Party! When Sofia invites her friends from the village to her very first royal slumber party, she's excited but nervous, too. What if her old friends don't get along with her new ones? Advice from Sofia's mom comes at just the right moment, and Sofia's slumber party winds up being a royal blast!

Differences between the book and episode 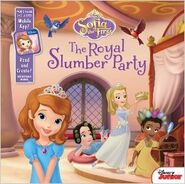