Disneyland
"The Saga of Andy Burnett"

"The Saga of Andy Burnett" is a miniseries broadcast in connection with the issuance of the U.S. channel ABC, Disneyland.

It is well known that Walt Disney was a visionary, a true passion for the future. It is, however, only justice against the number of technical innovations and new ideas that the Master of animation endorsed! What the public knows less, however, is that the father of Mickey was also an avid historian. Francophile and beyond, an admirer of the culture of "old" Europe, it is equally passionate course and of course for the history of his "young" country, and particularly of American folklore. All his work and reflects his desire to understand the past - and look the same as not to repeat the mistakes -. Better prepare for the future Pecos Bill or Johnnny Appleseed in Melody are also the earliest examples . But television is undoubtedly Walt Disney, the ideal ground for the imaging of his passion for American folk theme to choose very quickly to new TV miniseries. If Davy Crockett ushers in the genre, The Saga of Andy Burnett, consisting of six episodes, soon took over and landed on the small screen in 1957 when the fourth season of Disneyland . The following year - the fifth of the show, meanwhile renamed Walt Disney Presents - dedicates two new series: The Nine Lives of Elfego Baca (ten episodes) and Texas John Slaughter (seventeen episodes). Then linked, in 1959, Fox Marshes (eight episodes) and in 1960, during the seventh season of the ABC program, Daniel Boone , four-part series, to which are added four special episodes an hour Zorro conclude that the two famous seasons adventures of masked vigilante. In 1961, Walt Disney goes to the competition and chose NBC as broadcast medium. The emission rates once again its name to Walt Disney's Wonderful World of Color . His big news is announced in the title: the show is now in color. It also operates in the concept abandoning the western miniseries format that the public is tired to put on view TV movies, which often both parties can address a variety of topics ...

Once is not custom, The Saga of Andy Burnett is not based on a real character of American folklore but a fictional character invented by Stewart Edward White. Born March 12, 1873 in Grand Rapids, Michigan, he began his writing career at the dawn of the 20th century. His books quickly run a huge success with the American public that loves rediscover the past now gone country: the time of the great outdoors and explore its pristine borders ... Stewart Edward White, who goes off September 18, 1946, also leaves a posthumous book involving four unpublished novels (The Long Rifle written in 1930 Ranchero in 1933, Folded Hills Stampede in 1932 and 1942), published a year later in as The Saga of Andy Burnett. It tells the adventures of a young man, a farmer in Pennsylvania, who flees her violent stepfather, migrating westward, with the consent of his grandmother and only inheritance, a gun that belonged to Daniel Boone transmitted in his family from generation to generation. Along the way he meets the mountain, Joe Crane, who teaches him how to survive in nature. Novels, Blending fiction and historical reality, and tell her trip to California ...

The Saga of Andy Burnett first contains the foundations of novels and focuses on the mountain side of the story more than the migration to California. Moreover, the hero never expressed in the series, its intention to join the coast but rather seeks to settle permanently in the mountains. The miniseries is thus divided into two arcs of three episodes each. The first is the discovery of the characters and the migration from the East to the Rocky Mountains, while the second is dedicated to the installation in the famous mountains and problems with the Indians. Clearly built to ride the success of Davy Crockett , The Saga of Andy Burnett did, however, neither the charm and intensity. Worst of all western miniseries offer Walt Disney Television, The Saga of Andy Burnett is certainly the most disappointing. However, it leaves track without displeasure, particularly through its role as that hero without fear and without reproach, also has some weaknesses, particularly in the face of pretty girls. In the end, the first two episodes appear somewhat laborious; viewer interest resuming, it is true, with the events in Mexico and provide the last three good times, even if the choice to have focused on the conflict with Indians do not prove, in retrospect, very exciting. Saga of Andy Burnett then has a sort of conclusion at the very end of the sixth episode (with the resolution of the conflict with the Indians but also the death of a companions Andy), a practice that Disney no longer resume in its upcoming series, he leaves all with open ends.

The Saga of Andy Burnett therefore depends entirely on the main and title role actor Jerome Courtland. Born December 27, 1926 in Knoxville, Tennessee, he began his film career in 1944 as an actor in Thunderbolt, a film from Columbia. Then he makes films for the big screen until the mid-60s and landed parallel to the small, from the mid-50s. It also goes behind the camera as a director and producer, primarily for television. Jerome Courtland had a successful career at Disney. Outside The Saga of Andy Burnett, it appears, in fact, in 1957, in the issuance of Disneyland , The Fourth Anniversary Show. He then made ​​for the label, the film The Lion Mountain (1972) and TV movies Hog Wild (1974), The Pursuit with Diamonds (1974) and The Sky Trap (1979). He is also assistant producer on episodes of Gallegher and producer of TV movies The Young Runaways (1978), The Million Dollar Dixie Deliverance (1978) and The Ghosts of Buxley Hall (1980) and also films: The Witch Mountain (1975) Pete's Dragon (1977), The Visitors from Another World (1978), Max and the Devil (1981) and Amy (1981).

Purists will notice similarities between the beautiful Mexican episode of The Saga of Andy Burnett and series Zorro . A reason the shooting that took place in the same scenery freshly built in Burbank backlot! The two productions at the same time and happily intersect with, for example, participation in The Saga of Andy Burnett, Britt Lomond known for his role as Captain Monastario in Zorro and the appearance of the Joe Crane ( Jeff York) came from The Saga of Andy Burnett in three episodes of season 2 of Zorro (The Man of the Mountains, The Hound of the Sierras and The Man Hunt) ...

The Saga of Andy Burnett sees its limited to a minimum career. Do to spanning only six episodes, the miniseries did, not really have the time to settle. I must say that Walt Disney soon realized the low public interest in his new creation. He then turns his back, the next season of his show, offering in its place a new miniseries. However, like all episodes of emissions anthologies of Disneyland and Walt Disney Presents offered between 1954 and 1961, The Saga of Andy Burnett was first broadcast in black-and-white and color again. Walt Disney, who, was a true visionary, had the good idea to be filmed from the original colors, reserves, indeed, and at a lower cost, a new launch window, a second life his works; on Disney Channel USA enjoying the windfall during the 80s and 90s.

The Saga of Andy Burnett is the least exciting of all western miniseries created by Walt Disney for television. It applies only to the young hero, terribly endearing ... 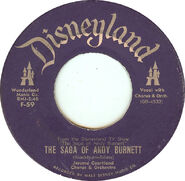 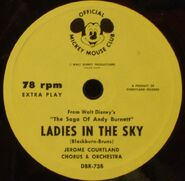 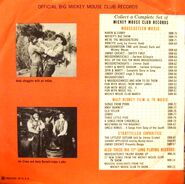 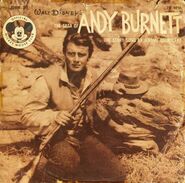 Add a photo to this gallery
Retrieved from "https://disney.fandom.com/wiki/The_Saga_of_Andy_Burnett?oldid=3822155"
Community content is available under CC-BY-SA unless otherwise noted.