Scott Calvin/Santa Claus (Tim Allen) is having difficulties managing Christmas this year. His wife, Carol (Elizabeth Mitchell), is expecting their first child which was due a week ago and is afraid that he will be making his deliveries while she is making hers. Wanting her to feel more comfortable, he invites his in-laws, Bud and Sylvia Newman (Ann-Margret and Alan Arkin), up to the North Pole, along with his ex-wife, Laura (Wendy Crewson), her husband, Neil (Judge Reinhold), and their daughter, Lucy (Liliana Mumy), to keep Mrs. Claus company. While Curtis, who is now the head elf, (Spencer Breslin, as Bernard has quit, retired, or on vacation at this point) does point out the S.O.S. He does agree to help. Meanwhile, Scott is summoned to a meeting of the Council of Legendary Figures consisting of Mother Nature (Aisha Tyler), Father Time (Peter Boyle), the Easter Bunny (Jay Thomas), Cupid (Kevin Pollak), the Tooth Fairy (Art LaFleur), and the Sandman (Michael Dorn). They show him a cardboard cut-out of Jack Frost that reads "Merry Frostmas" as he himself (Martin Short) arrives. Besides Father Time reminding him that he heralds the season and not a holiday, Mother Nature accuses him of attempting to upstage Santa by freezing a volcano in Hawaii, making it snow in the Amazon, and making it cold in Mexico thus sending the geese back up north for the winter. All the other Legendary Figures agree that a punishment needs to be invoked against him with the idea to suspend him. He tries to explain to them his desire to be more than an opening act and more like them a holiday figure because of his potential. Jack expresses jealousy over everything Santa gets and Scott brings up the part with the in-laws during the argument, Cupid recommends the "Escape Clause" which he declines. When Jack asks what it is, Father Time tells him that he would know more about it if he attended the meetings more often. Scott reluctantly agrees to let Jack Frost not be suspended and be sentenced to community service with a warning to him if he does anything wrong on his watch he is gone. He helps to disguise the North Pole as Canada for Bud and Sylvia's arrival. Scott manages to get them to "Canada" with the help of the Sandman.

However, Jack, who wants to have the power and influence of Santa, starts off by tricking Curtis into telling him what The Escape Clause is. Next he starts to ask Carol, who is picking out a Christmas tree, if becoming Mrs. Claus is worth it, to which she agrees. During the conversation, the family arrives, and so do the in-laws. Jack decides he must take more drastic action, so he goes around the North Pole and uses his powers to create technical problems with some of the equipment. The shop flies into chaos and many gifts are destroyed, and Scott is faced with the possibility that there will not be enough toys for all the children in time for Christmas.

Jack talks to Curtis about the Hall of Snow Globes, and discovers that Scott's can be used to activate the Escape Clause, the most powerful one of all. This one can help the current Santa escape from his job as Santa; if he holds his snow globe and says, "I wish I had never become Santa at all", the Escape Clause is triggered, and he can return to the point where he became Santa and prevent the event from occurring. Scott takes a quick break to show Lucy the Hall of Snow Globes, and gives her a magical one that shows her hugging a snowman, which turns pink because her hugs are so filled with love and warmth. As they leave, Jack sneaks into there and steals Scott's, freezing Neil and Laura when they catch him, and nearly doing the same to Lucy before choosing to put her in a storage closet instead. After further attempts at sabotage, he manages to enrage Bud and Sylvia, and gives Scott a gift as he talks about his frustrations. Not realizing what he is doing, he is persuaded into uttering the Escape Clause while opening his gift and taking out his snow globe. He and Jack are sent back in time to his front yard, where, twelve years earlier, he caused Santa to fall off the roof and donned his suit to become the new Santa. Jack reaches the suit before the past Scott even can come out of his house to repeat events from the first film and puts it on to become Santa, knocking out the present Scott with a shovel to keep him from interfering in Jack's attempt to change the timeline.

Scott's is sent back to the present day, where his non-Santa life is a disappointment as he has been the CEO of his old job for the last twelve years and even works on Christmas Eve. He drives over to Laura's house, who treats him very coldly and explains that she and Neil got divorced, revealing that the new timeline has effects on other people as well. Scott also learns that he and Carol never married and that she moved away years ago because "there were not enough local kids in town to terrorize or something". Laura then gives Scott a magazine that shows the North Pole billed as a resort, which he recognizes as Jack's handiwork. He flies there via commercial airliner and is stunned at what he sees; as the new Santa, Jack has taken the commercialization of Christmas to the extreme by transforming the North Pole into a tourist attraction where wealthy parents can pay to have their kids put on the nice list. In addition, Christmas is renamed "Frostmas", the elves are miserable (unlike the happy, productive workers they were when Scott was in charge), and all the reindeer are confined to a petting zoo.

Scott eventually finds Neil and Lucy, although they too are not happy to see him and Neil states that Charlie (Eric Lloyd) didn't want him to be his father, causing his and Laura's divorce. Scott confronts Jack with what he has done and claims his vision of Christmas is not what the holiday is about, but Jack reminds him that he was the one who said "I wish I had never become Santa at all" and invoked the Escape Clause to begin with.

Scott convinces Lucy to sneak into the Hall of Snow Globes, and bring Jack's to him. He interrupts a musical performance by Jack, when Lucy tosses him his snow globe. Realizing Scott's plan, Jack mocks that Scott will never convince him to invoke the Escape Clause, but Scott plays a recording of him saying "I wish I had never become Santa at all", when he said it to him earlier. Jack screams in fury as the Escape Clause is invoked again, and he and Scott are whisked back to the past. Scott holds Jack down while his past self finds the suit and puts it on like in the original film, restoring events to the way they were. Jack screams in anguish as his alternate timeline is erased and he is stripped of Santa's powers.

Back in the present, Scott reunites with Carol, even though no time has passed since he left, and he promises to make her life better. He then shows Bud and Sylvia the truth about his workshop, where, despite Jack's sabotage, gifts are being manufactured and will be ready on time for his deliveries. To his surprise, Charlie arrives and helps the elves out, as does the Council of Legendary Figures.

It seems things are going perfectly until Curtis comes in with Lucy (who was locked in the closet), and both Neil and Laura are wheeled in, frozen solid. Jack is also dragged in by the "Elficers" and he refuses to undo his spell on them. By unfreezing them, he would have to "unfreeze himself" and so they will be frozen forever, leaving Jack smug at thinking he still won since he may have lost the chance at being Santa, but he still has Neil and Laura as his consolation prize. When Scott asks for Mother Nature to help him out, she reminds him that the abilities of a Legendary Figure will not work on others. However, he has an idea. He tells Lucy to give Jack one of her heartwarming hugs. Full of love and warmth, it changes him, melting his clothes and hair from icy to normal and breaking the spell around Neil and Laura; everyone, including the defrosted and reformed Jack, celebrates with a hug. Carol suddenly announces that her baby is coming, and luckily, Scott is there as he promised he would be. She has a boy and names him Buddy, which is the long version of her father's name.

The film received negative reviews from critics, earning a 17% "rotten" rating at Rotten Tomatoes, as opposed to the critical acclaim the first film got and the mixed reviews the second film got. with the consensus that "Playing Jack Frost as an evil cross between Liza Minnelli and Liberace, Martin Short is a welcome presence, but this tired series continues drawing from its bag of bland gags and dumb slapstick." Eric D. Snider, a reviewer, said that Allen did the first film "The first time with enthusiasm, the second time with affection and the third time for a paycheck."[1] Kyle Smith wrote, "We're getting a turkey and a ham for the holidays. Santa is so dumb he should be demoted to cleaning up after Geoffrey the Giraffe at Toys 'R' Us." Manohla Dargis dismissed the movie (in a three-paragraph review) as "Squeaky clean, but you might die of boredom." Finally, Nathaniel Bell wrote off the film as "Holiday filler, stuffed with unearned emotion and trite sentimentality." In the UK, Mark Kermode described it in 2006 on BBC Radio Five Live as "The cinematic equivalent of tertiary syphilis".

The film was given five Razzie Award nominations at the 27th Golden Raspberry Awards: Worst Actor (Tim Allen who was also nominated for his performances in along with Zoom and The Shaggy Dog), Worst Supporting Actor (Martin Short), Worst Prequel or Sequel, Worst Screen Couple (Allen and Short) and Worst Excuse for Family Entertainment.

The first two films had become box-office successes during their opening weekends, but The Santa Clause 3 was beaten by Borat for the #1 spot. 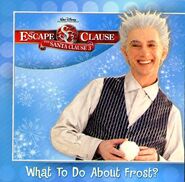 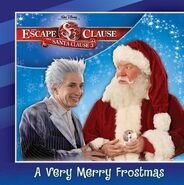