"The Second Temple" is the first segment of the thirty-seventh episode of Amphibia. It aired on April 10, 2021.

Anne and Marcy's quest to get home takes them to an icy mountain temple, but they'll need help to find it.

Anne, Marcy and the Plantars travel to the Amphibian arctic to search for the second temple. Upon their arrival, they manage to locate the entrance rather quickly, only to see that there is nothing there. As they walk through it, they spot a parrot that Anne and Sprig immediately recognize as belonging to Valeriana from the Bizarre Bazaar. They spot her stand before she reveals herself and announces that she is aware of the temple. Valeriana claims to know the way to it, but that it will be difficult as it is fraught with peril. They agree to go regardless and she gives the group new coats made out of caterpillar fur as the cold is supposed to be severe. Before heading out, Anne voices her suspicion of Valeriana privately to Sprig.

As they climb the side of a mountain, Valeriana criticizes the group for being slow. She then secretly summons a cardinal that attacks the group. While they do not eat frogs, they eat caterpillars and Anne tosses her coat away so that the cardinal can go after it. Despite saving the group, Valeriana chastises Anne for removing her protective wear. They then spot a small igloo that is in the way of an avalanche. Anne goes to rescue the people, only to find it empty. She avoids the avalanche and Valeriana berates Anne for not thinking and tells them that they are not worthy. Anne gets mad and criticizes Valeriana for her carelessness and her order for their snobbish beliefs. Offended, Valeriana teleports herself and Anne away from the stunned group.

Valeriana takes Anne to the top of a tall tower as she attempts to take the Calamity Box back from Anne. She calls her selfish and recalls past incidents that Anne did that were greedy including the theft of the box, which Anne finally admits to. As she attempts to grab it, Valeriana falls off the tower, but Anne rescues her. Valeriana then reveals that everything up to that point was the temple and the test, she also tells Anne she has a heart but her empathy is not enough; what is a heart without responsibility and grants her wish of recharging the gem, though it takes a while to load as the color begins to drain from her eyes. However, Anne hears her friends screaming and grabs the gem before it completed its charge. She arrives to see that her friends were simply watching videos and they all head back home. As they walk away, the blue gem on the box flickers. 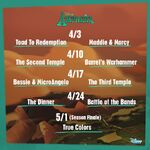 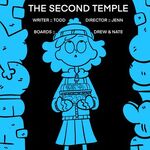