The Wasteland (until its destruction)

The Shadow Blot is the main antagonist in Epic Mickey. A destructive giant monster made of paint and thinner accidentally created by Mickey Mouse, the Blot long rampages Wasteland, seeking a way to escape it and continue its terror in Mickey's world.

The Shadow Blot was present in the earliest concepts for Epic Mickey as the force that brought Mickey into Wasteland. The Shadow Blot was initially a revamped version of the Phantom Blot, but Warren Spector intended on expanding the threat the Shadow Blot posed compared to his camera-stealing motivation in his original appearance. The character's name was changed when the crew deemed that their revamped Shadow Blot had become very far removed from the original and in keeping with the "familiar but strange" feeling of the use of some characters.

The Shadow Blot is an enormous, slime-like humanoid comprised of black, blue, and purple shades of ink with glowing green eyes and mouth. When it appears in its full form, its appearance bears a strong resemblance to Chernabog from Fantasia.

Not much is described its personality in the game, although it is clear that it obviously does not care about the destruction it causes. Due to its accidental creation, the Blot is an insatiable force of nature craving to be complete and loved and is willing to do whatever it needs to get what it wants.

According to The Art of Epic Mickey,

"If there's any character worse off than Oswald, it's The Blot, which was never given any shape at all or the love of an audience. As a result it eternally craves these things. It's not evil by itself, but the Blot pursues these goals ruthlessly."

The book also explains that the Shadow Blot is a reflection of Mickey's carelessness and irresponsibility and Oswald's resentfulness and craving for fame.

When visiting Yen Sid's workshop and playing with magic paint, Mickey Mouse accidentally creates a monster and quickly tried to erase it using thinner. However, what Mickey erases goes back into the jug and falls into Wasteland, causing the Thinner Disaster and setting the Blot Wars into motion. Allying with The Mad Doctor, the Blot came very close to victory, only to be sealed away in the Jug by Oswald the Lucky Rabbit and Ortensia, though at the cost of Ortensia's life.

Ever since that time, the Blot's presence remains in Wasteland through the various drippings that escaped the Jug, the largest of which become the Blot's eyes and ears in Wasteland.

Continuing his work with the Blot and commanding the Blotlings in his stead, the Mad Doctor works on a plan to allow the Blot to reach through the portal to Wasteland into Mickey's world and capture another toon to steal their heart. Choosing the character with the biggest heart of them all, Mickey, the Blot drags the mouse down into Wasteland, though the Mouse manages to bring Yen Sid's magic paintbrush with him, frightening the creature off upon seeing it.

While Mickey travels through Wasteland to find rocket parts to get back home, the Shadow Blot built its army up to assault Oswald's Fortress on Mickeyjunk Mountain and open the Bottle. Mickey foils an imposter Shadow Blot on the mountain summit, but when Mickey confessed that he was the one responsible for causing the Thinner Disaster and creating the Blot, an enraged Oswald accidentally broke the Jug open, releasing the real Blot.

Ransoming the lives of Oswald and Gremlin Gus for Mickey's heart, the Blot then proceeded to begin absorbing all of Wasteland's paint with Bloticles attached to the ground and when he's done, destroy Mickey's world too. Mickey destroyed these connections and he and Oswald planned to attack him with the Moonliner rocket. Absorbing the paint from the rocket and causing it to crash land in Dark Beauty Castle, Oswald came up with another plan to defeat the Blot--bombard it with fireworks, setting the stage for Mickey's final battle where he must activate the fireworks and eventually gets dragged inside the Blot to get his heart back by force.

After breaking his heart free, Mickey's heart is given back to him by Oswald and the Lucky Rabbit hits the button to launch the fireworks, destroying the Shadow Blot in a series of colorful explosions that also serve to send Mickey back home, as well as causing a rain of paint to fall over Wasteland, changing it back into the paradise that it once was.

The Shadow Blot is mentioned a few times by the residents of Wasteland and Oswald throughout the game. Since its destruction, the Blotlings ran rampant in Mean Street until they were moved into Blot Alley in Bog Easy. The Blotlings seem to hate Mickey as he is the one that destroyed the Blot, leaving them homeless.

The Blot makes a non-physical appearance as part of a diorama in the old train tunnels while Mickey and Oswald chase after Prescott. The diorama retells Mickey's victory against the Blot using the fireworks atop Dark Beauty Castle.

Concept art of the Shadow Blot during an "infusion" process of paint, ink, and thinner

Concept art of the Shadow Blot, resembling the Horned King 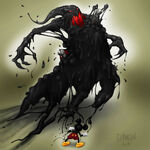 Unused concept of the final battle against the Shadow Blot

The Shadow Blot cameo as part of the diorama in the old train tunnels, here known as "The Storm Blot".

A screenshot from an early version of the opening cutscene where both the Shadow Blot's eyes and mouth are red.

The Shadow Blot after being unleashed from his "prison".

The Shadow Blot making his deal with Mickey.

Retrieved from "https://disney.fandom.com/wiki/The_Shadow_Blot?oldid=4388569"
Community content is available under CC-BY-SA unless otherwise noted.