Singing, performing for others

Captain Hook trying to take her feathers, Hook spoiling her and her friends fun
The Sing-Songbird is a large flightless bird with beautiful tail feathers of different colors featured in the Disney Junior series Jake and the Never Land Pirates.

The Sing-Songbird first appeared in the episode "A Feather in Hook's Hat". Jake and his crew decided to visit the Sing-Songbird to get a new feather for his captain's hat after he ruined the first one she gave him in a game. Unbeknownst to the sea pups Captain Hook wanted to replace his feather as well with the aide of his scurvy crew he found the Sing-Songbird in the Never Land Jungle. Hook demeaned the bird to give him one of her feathers but she refuses causing the captain to chase the bird all across Neverland. Tiki Forest was the first location The Sing-Songbird tried to hide from Captain Hook. Hook tries to force the Tiki Trees into revealing the where about of the Sing-Songbird but they refuse. Jake, Izzy, Cubby, and Skully trick Hook, and his crew disguise as Tiki Trees pointing them in the wrong direction.

The Sing-Songbird reappears in the episode "Mystery of the Missing Treasure!". Jake and his crew discover that someone has stolen their Team Treasure Chest originally the young pirate believed the thief was Captain Hook and his scurvy band were the thieves but none of the various clues the pirates discover on Pirate Island match Hook and crew. It wasn't until they discover a brown feather and Skully suggest they journey to Buccaneer Bird Bluff to ask their feathered friends if they knew who the feather belongs to. The Sing-Songbird recognizes the feather--it belongs to Fast Claw, the pet falcon of the sneaky, plundering pirate Beatrice Le Beak. 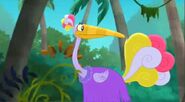 The Sing-Song Bird with Sandy. 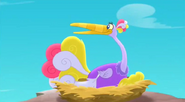 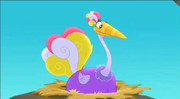 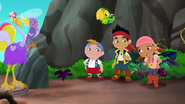 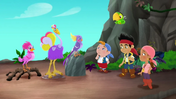 Retrieved from "https://disney.fandom.com/wiki/The_Sing-Songbird?oldid=4258739"
Community content is available under CC-BY-SA unless otherwise noted.