Music, singing, each other

Active
The Singing Stones are minor characters featured in the Jake and the Never Land Pirates series.

The Singing Stones first appeared in the episode of the same name. While sailing the open Never Sea various islands Jake and his crew overhear singing coming from a near by island were they meet the singing stones family. The Singing Stones explain they desperately need to return to their home on Singing Stones Island on time before Peter Pan's comet arrives or they will never end their curse. Jake and his young pirate friends agreed to help by tying the small island to Bucky and began towing the island. Unaware Captain Hook was spying on them, Hook refuse to allow the puny pirate to have another island and was determined to claim the Singing Stones island for himself. Jake and his crew try to intervene explaining the situation to Hook, but the greedy pirate refuse to give up his island paradise as plant his flag into the tiny island removing a chunk of island with Little Sister stranded on it. 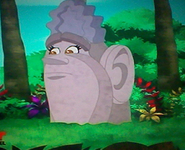