The Small One is a Christmas short film that was released on December 16, 1978, accompanying a re-release of Pinocchio. Directed by Don Bluth, the short takes place in Nazareth and tells the tale of a young boy and his beloved donkey, Small One, which he is forced to sell, but wants to give it a good place to go, eventually selling it to Joseph and Mary as transportation to Bethlehem. The story is based on a children's book by Charles Tazewell.

Outside of the city of Nazareth, a young boy and his father own four donkeys. Three of these donkeys are young and strong. The fourth donkey, Small One, is old and weak, but the boy loves him anyway. Everyday, the boy and the donkey play together before they go to work, helping the boy's father to collect wood.

The boy and his father take the donkeys to work one morning, as they always do. Many times, the boy loads Small One with small sticks, since Small One can't carry heavy loads any more. Small One even has trouble carrying stacks of small sticks and the boy helps to carry them for him.

The next morning, the boy takes Small One to the market in Nazareth. Unfortunately, nobody wants an old weak donkey but the tanner, and he only wants to kill Small One in order to make leather out of his hide. After failing to find another buyer, the boy and his donkey return to the tanner's shop. The boy weeps, and Small One, accepting his fate under the tanner's knife, tenderly consoles the boy.

Just as everything looks bleak, a kind man comes up to the boy and asks if Small One is for sale. The man is none other than Joseph, who needs a gentle donkey to carry his pregnant wife to Bethlehem. The boy sells the donkey for one piece of silver (the same price the boy's father agreed upon) and watches as the couple and Small One leave on their journey as a bright star appears in the sky. 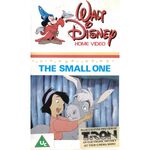 UK Cover (Under the name of "A Christmas Miracle")
Community content is available under CC-BY-SA unless otherwise noted.
Advertisement