The Sole of Rock n' Roll

The Sole of Rock n' Roll is a character in the attraction Food Rocks at Epcot. Serving as a seafood representative in the show, she performs Just Keep It Lean, a parody of Cher's "The Shoop Shoop Song (It's in His Kiss)"

The Sole was originally developed as a Tina Turner parody character named Tina Tuna.[1] When she declined, the production team ended up recruiting Cher, rebranding the character as the "Cher-acuda" internally, though she was only referred to as the Sole of Rock n' Roll in the show itself. During negotiations, Cher asked for many things in exchange for her participation, including free theme park tickets for the duration of the show's run, before choosing to donate everything she negotiated for to a children's charity. However, as a result of scheduling conflicts, Cher was unable to actually record her character's voice, with the soundalike role going to Gloria Bellis.

Some years after the attraction's opening, the figure was given a complete redesign, the only one in the attraction to receive such a drastic change. 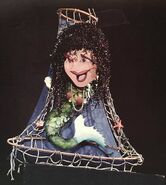 The original Sole figure, before installation

Early model for Tina Tuna
Add a photo to this gallery

Retrieved from "https://disney.fandom.com/wiki/The_Sole_of_Rock_n%27_Roll?oldid=4163652"
Community content is available under CC-BY-SA unless otherwise noted.