The Songs of Playhouse Disney

The Songs of Playhouse Disney is a British CD/DVD set released by Warner Vision International and Walt Disney Records on September 26, 2005.

The set includes various songs from various Playhouse Disney shows, as well as many songs from the "Big Dave and Little Alex" era of the channel.

The same album was also released in territories like France and Spain in 2006, although the song list is altered, mainly with the removal or replacement of the UK-specific Big Dave and Little Alex songs. A second version was also released in these territories, which added songs from then-newer shows like Mickey Mouse Clubhouse and Little Einsteins.

The DVD included with the CD includes sing-a-long versions of the songs featured, although the non-Playhouse songs were not included. It also features DVD promos for Bear in the Big Blue House and The Book of Pooh, as well as a Playhouse Disney promo. 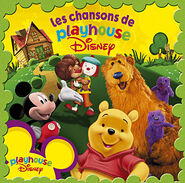 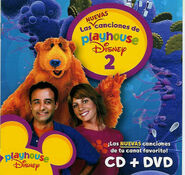 Spanish DVD version.
Add a photo to this gallery
Retrieved from "https://disney.fandom.com/wiki/The_Songs_of_Playhouse_Disney?oldid=4064249"
Community content is available under CC-BY-SA unless otherwise noted.