"Nutcracker Suite" (Fantasia)
"The Carnival of the Animals" (Fantasia 2000)

"The Rite of Spring" (Fantasia)
"Pomp and Circumstance" (Fantasia 2000)

“And now we're going to hear a piece of music that tells a very definite story. As a matter of fact, in this case, the story came first and the composer wrote the music to go with it.”
―Deems Taylor[src]

He dreams that he was a powerful sorcerer high on top of a pinnacle commanding the stars, planets, and water. Mickey wakes up to find that the room is filled with water, but since the cauldron is overflowing, the broom is not stopping. Mickey tries to stop the broom, but with no success, the broom walks right over him, bringing more and more water. Mickey even tries grabbing one of the buckets, but that, too fails. Finally, when the water keeps rising, Mickey, in desperation, grabs a huge ax, and chops the broom into pieces. Just when it is all over as Mickey is away, the little wooden split pieces, lying quietly on the floor, begin to come alive, stand upright, grow arms out of their sides, and turn into more brooms with buckets of water. They keep going to the vat and fill it up. Mickey tries to get the water out, but finds that there are too many brooms. Mickey goes to a book and looks for a spell to stop the brooms. Mickey finds himself in a whirlpool. Just then, Yen Sid comes in and sees this, and with a wave of his hands, the water descends and the army of brooms is decreased to one broom.

After the piece is over, Mickey runs to Leopold Stokowski and congratulate each other and Mickey exits and Leopold waves goodbye after he shakes hands with him. 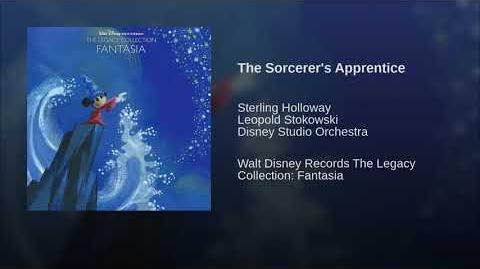 Retrieved from "https://disney.fandom.com/wiki/The_Sorcerer%27s_Apprentice?oldid=3811006"
Community content is available under CC-BY-SA unless otherwise noted.