The Story of Menstruation

The Story of Menstruation is a 1946 10-minute American animated film produced by Walt Disney Productions. It was commissioned by the International Cello-Cotton Company (now Kimberly-Clark) and was shown in a non-theatrical release to approximately 105 million American students in health education classes. This film was selected for preservation in the National Film Registry in 2015.

It was part of a 1945 to 1951 series of films that Disney produced for American schools. Gynecologist Mason Hohn was hired as a consultant to ensure that the film was scientifically accurate. Hohn was hired to increase the likelihood that school doctors and nurses would allow the film to be shown. Hohn's involvement led to a stronger emphasis on biology than other marketing by ICCC. The Story of Menstruation increased its reputation when it received the Good Housekeeping Seal of Approval.

It was one of the first commercially sponsored films to be distributed to high schools. It was distributed with a booklet for teachers and students called Very Personally Yours that featured advertising of the Kotex brand of products, and discouraged the use of tampons, where the market was dominated by the Tampax brand of rivals Procter & Gamble.

The film uses animated diagrams to detail the menstrual cycle. The film's narrator, who is not identified in the credits, informs the viewer that "there is nothing strange or mysterious about menstruation," and it shows women engaged in such activities as bathing, riding a horse and dancing during their menstrual cycles. The film's narration also provides advice to avoid constipation and depression, and to always keep up a fine outward appearance.

The Story of Menstruation is believed to be the first film to use the word vagina in its screenplay. Neither sexuality nor reproduction is mentioned in the film, and an emphasis on sanitation makes it, as Disney historian Jim Korkis has suggested, "a hygienic crisis rather than a maturational event." The menstrual flow was depicted as snow white instead of blood red.

The film's copyright was renewed by Walt Disney Productions on December 3, 1973. 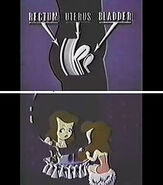 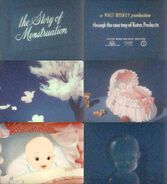 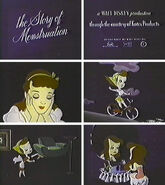 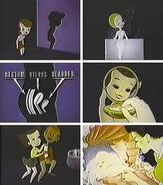 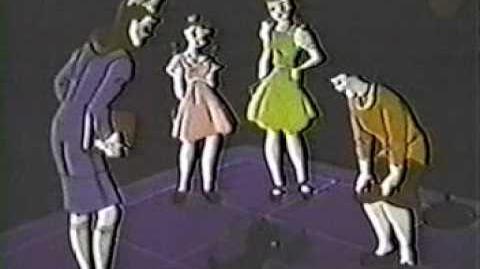 Walt Disney The Story Of Menstruation 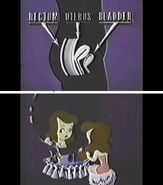 The film alternates between clinical panels describing the process of menstruation, and animated sequences that provide viewers with tips on hygiene and behavior
Add a photo to this gallery

Retrieved from "https://disney.fandom.com/wiki/The_Story_of_Menstruation?oldid=4073622"
Community content is available under CC-BY-SA unless otherwise noted.