The Sugar Plum Fairy from the story by E. T. A. Hoffmann and the ballet by Pyotr Tchaikovsky

Regent of the Land of Sweets (formerly)

To conquer all the Four Realms (failed)

"That's more like it, a proper army. To collect discipline, order, control!"
"HOW DARE YOU SPEAK TO YOUR QUEEN AT ME!"
"Clara, what have you done?!" (last words)
The Sugar Plum Fairy (also known simply as Sugar Plum) is the main antagonist of Disney's 2018 live-action film, The Nutcracker and the Four Realms. She is a bitter and devious fairy who seeks to conquer all Four Realms, using Mother Ginger as the pawn in her schemes. She manages to make her intentions hidden, until a point where Clara Stahlbaum and Phillip the Nutcracker discover it, at which point they dedicate their efforts in stopping Sugar Plum and saving the Four Realms.

Sugar Plum is loosely based on the character from the same name from the story by E.T.A. Hoffman and the ballet by Pyotr Ilyich Tchaikovsky.

Eventually, Marie decided to leave the Four Realms forever to be with her real human family, leaving the kingdom to be ruled by the other reagents. All four realms' people were sad to see Marie go, but while the male regents and Mother Ginger accepted this change, Sugar Plum secretly felt hurt and betrayed by Marie and decided enact vengance by conquering all the Realms by using Marie's device to create an army of unstoppable tin soldiers. Mother Ginger tried to stop her, but Sugar Plum was able to cover her conspiracy by framing the latter, leading to her banishment within her own realm as well as going to war with the other three. During this time Sugar Plum searched for the key to activate the device but was unable to find it.

On the surface, Sugar Plum appears childishly innocent and kind, acting very sweet and concerned for the Realms' safety, and also very adoring of both Marie and Clara.

In reality, however, Sugar Plum is vengeful, bitter, and vindictive, all of which stemmed from Queen Marie's departure from the Realms to be with her human family. Sugar Plum viewed this as a betrayal as well as an abandonment on her former Queen's part, and subsequently desired to conquer all the Realms as a sort of childish spite against Marie. Despite this, she was able to maintain a kindly facade for years, and was manipulative enough to convince the others that Mother Ginger was the evil one and manipulate Clara and Phillip into getting the key for her.

Sugar Plum is also very ruthless and doesn't care who she hurts to get what she wanted. This was first shown when she used Tin Soldiers, which were described by Phillip as "hallow" and casually transformed one of her own (sentient) loyal soldiers back into a toy just to demonstrate what she planned to do to the other leaders once she had taken over.

Despite her evil, at her core, she is essentially a hurt and angry child whose entire actions mirror a child lashing out at their parents for their supposed abandonment, so much that she goes as far as to destroy all her "mother's" creations and even her own "siblings" without any shame or conscience, yet still retaining an intelligence and patience necessary to manipulate events to her choosing. She also appears to be very vain, boasting about how prettier she is than Mother Ginger.

The Sugar Plum Fairy started off as a lifeless porcelain doll owned by Marie Stahlbaum when she was a child, but was brought to life after Marie created the Four Realms as its first Queen. Sugar Plum was assigned by Marie to rule over the Land of Sweets while three other regents (Mother Ginger, Shivers and Hawthorne) were assigned to rule the remaining realms.

At first, Sugar Plum felt comfortable being in the service of Marie, but as the years went by, Marie decided to leave the Four Realms for her family, so she left the four regents in complete charge of the Four Realms. Though Ginger, and the Male Regents accepted this new change in leadership, Sugar Plum secretly disapproved this as she felt betrayed and abandoned by Marie. She then decided that it was time to take over the Four Realms as its new Queen and rebuild them in her own image to alleviate her pain.

Sugar Plum soon learned that Marie created a machine capable of converting toys into living objects (presumably the same one that brought her to life), and formulated a plot to create and bring life to an army of Tin Soldiers to accomplish her goal. However, Ginger learned of Sugar Plum's plot and tried to stop her, only to be framed by the latter for trying to incite the plot, resulting Ginger's banishment within her own realm and a war against the other three realms. Despite the setback, Sugar Plum is distraught to learn that a certain key that can activate the machine is lost within the Realms, forcing herself to maintain her cover.

During one Christmas Eve, an ill Marie gets her husband to give their children Christmas presents as her dying wish. Her youngest daughter Clara receives a handcrafted egg-shaped box, and is told by her godfather Drosselmeyer that Marie created it for her. After getting into an argument with her father at the ballroom for refusing to dance with him, Clara finds a string signifying her gift, which leads her into the Four Realms. There, Clara spots the key hanging on a tree, but a mouse steals it for Ginger, much to her dismay.

Clara approaches Captain Philip Hoffman, who takes her over to see Sugar Plum, Hawthorne and Shivers, who are all delighted to see the daughter of their former queen. Sugar Plum explains to Clara about the history of the Four Realm and the machine, in which she and the other regents intending to use it to defend their realms against Ginger and her forces. Sugar Plum then sends over Hoffman and several soldiers to aid Clara in confronting Ginger and successfully stealing back the key, but Clara is annoyed to find out that the egg turns out to be a music box after being locked by the key.

With the key finally in her possession, Sugar Plum uses the machine to bring the Tin Soldiers to life, revealing her true colors by admitting that she felt resentful towards Marie for leaving the Realms and that she intends to use her army to take over the Realms as its new Queen. She also informs that the machine can also revert any person living in the Realm back into a toy and that she plans to use it on those who would defy her new reign. With everything in her control, Sugar Plum imprisons Clara, Hoffman and the male regents before heading out to initiate her invasion on the Realms.

However, Clara and the others escape while Hoffman convinces Ginger and followers to help them foil Sugar Plum's plot. As Sugar Plum directs her Tin Soldier army to invade the Land of Amusements, Hoffman and Ginger's clowns fight against several of the Tin Soldiers. In the meantime, Clara enters the machine's room and shuts it down, causing the palace's water wheels to cease rotating and catching Sugar Plum's attention.

As Mother Ginger fights off several Tin Soldiers to buy Clara more time, an angry Sugar Plum summons more Tin Soldiers to trap both of them. Ginger and Clara tried to reason with Sugar Plum by admitting that they understood how she felt about Marie's departure, but Sugar Plum refused to listen as she intends to turn Ginger into a toy with the machine. However, Clara, in case Sugar Plum refused to stop her intentions, revealed that she already reprogrammed the machine into zapping Sugar Plum, who is turned back into a lifeless porcelain doll as punishment for her crimes. With Sugar Plum's magic undone, all the Tin Soldiers became lifeless as well, thus ending Sugar Plum's reign of terror for good. Clara quietly mourns for the lifeless Sugar Plum out of empathy, knowing that she was her mother's toy and friend. Sugar Plum in her toy form is presumbably destroyed afterwards.

With Sugar Plum and the Tin Soldiers defeated, the Four Realms are finally at peace, and Clara is returned back to her family, where she reconciles with her father. 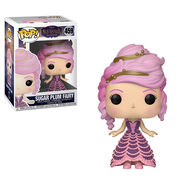 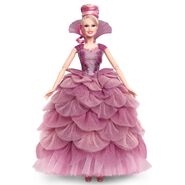 Retrieved from "https://disney.fandom.com/wiki/The_Sugar_Plum_Fairy?oldid=4206721"
Community content is available under CC-BY-SA unless otherwise noted.