After making the perfect plans to spend spring break with Bailey, Cody ditches the plans and goes off to work as an intern at a prestigious research firm, because he wants to be able to obtain a scholarship to Yale. This leaves Bailey infuriated and refusing to speak to him because she does not know about his intention to attend Yale. Cody tries to write her a letter explaining everything, but Zack loses the letter and tries to help Cody tell Bailey in order to obtain Cody's car. At the internship, everything goes well until Zack follows Cody there. He still wants Cody's car. Cody is busy, and Zack sees a cute girl and he follows her. She asks him if he knows how to operate a submarine, and he says he can try. But after Zack runs a billion-dollar submarine into a seawall, making Cody do so, the equipment is lost and Cody is kicked out of the program, furiously vowing to never forgive Zack, saying that they are twins, but definitely not brothers.

Dr. Olsen (Matthew Glave) approaches the boys and tells them that they would be ideal for the Gemini Project, a massive project studying the effects of twins. Though it takes them much thought, they eventually decide to participate, and land themselves among dozens of other twins.

At first, the project seems normal. The first phase of the project is to eat a delicious fruit, which connects the boys physically. But before long, the two suddenly find themselves connected metaphysically in a way they never have been—the second phase is they are able to think each other's thoughts and feel each other's pain. As tension builds, the two find themselves not only emotionally conflicted, but end up in an actual fight as well.

But as their week on the Gemini Project campus goes on, they soon discover that all is not what it seems. They overhear Dr. Olsen telling Nellie that it is a shame that Cody must lose his brain. The boys sneak into his lab to discover what the project is truly about. It turns out that stage three is a merge, which makes the twins combine together to make one brain. After that, Dr. Olsen can control them. Zack and Cody are confronted by Dr. Olsen, so they decide to make a run for it. The only problem is Dr. Olsen can control all of the other twins and he orders them to get Zack and Cody.

Meanwhile, Bailey has mixed feelings about Cody. She tries to ignore him to cause him pain, but Cody never calls again once Bailey doesn't answer the first time (Only because Dr. Olsen confiscated Zack and Cody's cell phones.) She doesn't know that Cody is in grave danger. She tries to talk it out with Woody and London, but that does not work. She is totally confused until she discovers the letter that Cody wrote, and how he only went on the internship to obtain a scholarship to Yale. She now understands, and thinks he is the "sweetest fella on Earth". So London, Woody, and she head off to apologize to Cody.

When they get to Cody's original internship, they discover that Cody has been kicked out. Because she earlier ate the dolphin food, London can understand what the dolphins say and finds out that Zack and Cody are in the Gemini Project. Dr. Spaulding tells Bailey, Woody, and London that the twins may be in grave danger. Bailey calls Mr. Moseby as she goes with London, Woody and Dr. Spaulding to save Zack and Cody.

Dr. Olsen captures Cody and Zack using his twins, and they are pinned to chairs in order to complete stage three. But Bailey, London, Woody, and Dr. Spaulding rush in to stop Olsen. Olsen puts an electric wall up though, so no one can stop him. Dr. Spaulding tells Dr. Olsen to show everyone who he really is, and it is revealed that he is Dr. Spaulding's evil twin brother and the reason he wanted all twins to think alike is because he was jealous of his brother getting all the awards and being the brilliant one then He pushes the button and Cody and Zack begin to merge. Little does anyone know that the thing the twins do best actually saves them. The twins argue while they are merging and they destroy the machine. The twins are freed, along with the other mind-controlled twins, and they rush up to their friends. Cody and Bailey share a romantic kiss to celebrate. Dr. Olsen is still trying to merge the twins because he is extremely upset. Bailey captures him using her rope tying skills. Then, they give him the same fruit as he gave to Zack and Cody. They also give one to Dr. Spaulding and tell him to think good thoughts about his brother. This turns Olsen good again, and Mr. Moseby comes in with the police, taking Olsen away after he and Spaulding make plans for lunch once he gets out of prison.

Cody and Zack reflect on what happens when they work together, and it is decided that they make a very good team.

Back on the ship, Bailey tells Cody that she had the best spring break ever, and they accomplished everything on her list. Zack receives the car from Cody, and he parks it in a restricted parking zone. Suddenly, a large shipping container for London's summer wardrobe drops down and smashes the car to Zack's disgust. Moseby says that spring break is over, now he only has to wait until summer vacation.

The movie was mostly filmed in Vancouver, Canada, but all of it was filmed in British Columbia locations. Locations such as the Vancouver Aquarium also played a major role in the production of the movie.

Sarah Peel of BSC Kids was positive about the film, saying the film was "typical" but said she was surprised at "just how funny it was". She later went on to say that it was a good film for younger children to watch. She gave the film a 7 out of 10. The movie premiered with 5.228 million viewers. 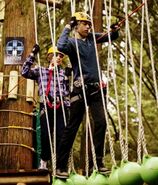 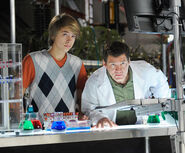