The theme song *("Swamp Fox, Swamp Fox, tail on his hat... nobody knows where the Swamp Fox at...") was sung by Nielsen as well. Myron Healey played Marion's top aide, Maj./Col. Peter Horry. One of the Swamp Fox's adversaries was Colonel Banastre Tarleton, played by John Sutton. Patrick Macnee played a British captain, Tim Considine played Marion's nephew Gabe Marion and Slim Pickens played Plunkett, one of the Swamp Fox's men. Hal Stalmaster appeared in three of the eight episodes as "Gwynn." The Swamp Fox did not bring to Disney the commercial success that had been achieved by Davy Crockett.

The series encompassed eight episodes, running as part of The Wonderful World of Color. Episodes were presented on Sundays on ABC from 6:30 to 7:30 p.m. and were also broadcast by CBC Television.

The Disney Channel reran Swamp Fox episodes in the 1980s and 1990s, while Nielsen was at the height of a second career as a white-haired comedy movie star. The first three episodes of the series were also released in 2005 on DVD (in a set including three episodes of The Nine Lives of Elfego Baca).

Ironically, the actual Francis Marion typically rode into battle with a metal pot serving as a helmet and a Continental Army uniform rather than a tri-cornered hat. 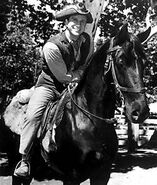 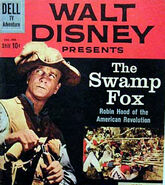 Retrieved from "https://disney.fandom.com/wiki/The_Swamp_Fox_(TV_series)?oldid=2423473"
Community content is available under CC-BY-SA unless otherwise noted.