This is how The Three Little Pigs costumes have changed over the years in the parks. 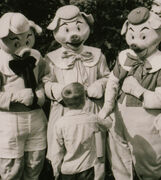 1955: The first set of the costumes had the size of a grown up and had their heads, arms, and bodies covered with Antron fleece. 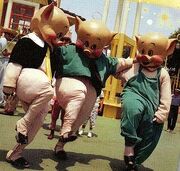 1959-1961: The Pigs' heads are made of porcelain, and the tops are a lot rounder, but they didn't wear hats at all. They didn't wear gloves either just to show their front hooves.

1961-circa 1970: The Pigs have larger heads and wider bodies. Fifer wears green, Fiddler wears red, and Practical wears blue with a dark green shirt. The performers peer through the hats to see.

Circa 1970-1991: Although similar to the previous design, these Pigs had different faces and differently-colored clothing. Small rods inside allowed the performers to move their arms.

1985-1997: These costumes of the Pigs were used as alternates in parades, meet and greets, and shows

1989-present: The current Pig costumes look similar to the ones in the previous picture, but are a lot stouter.
Add a photo to this gallery
Retrieved from "https://disney.fandom.com/wiki/The_Three_Little_Pigs_Costumes_Through_the_Years?oldid=3680216"
Community content is available under CC-BY-SA unless otherwise noted.