Disney Wiki
Register
Don't have an account?
Sign In
Advertisement
in: Locations, Buildings, The Twilight Zone Tower of Terror

Anthony Freemont
The Tip Top Club is a location from the Twilight Zone Tower of Terror.

The Tip Top Club was a club that was exclusive to the Hollywood Tower Hotel and its guests. The club is on an unmarked thirteenth floor of the hotel.

The orchestra of the club was led by Anthony Freemont, according to an advertisement in the lobby of the Hollywood Tower Hotel although this might be the result of reality alterations from outside influence. Previously, the Tip Top Club had featured the artistic stylings of the Silver Lake Sisters.

The Tip Top Club, along with the rest of the hotel closed sometime following the events of Halloween 1939 when employee Dewey Todd and guests Sally Shine, Emeline Partridge, Carolyn Crosson, Gilbert London disappeared in an elevator accident that sucked them into the 5th dimension.

Advertisements for the Tip-Top Club could be found throughout the queue and exit areas of the attraction.

In this film, the club housed a small orchestra that would perform big band style music, such as "Sing, Sing, Sing" originally by Benny Goodman. The band was supposed to feature Carolyn Crosson on Halloween, but she never made it to the party. It is seen at the end of the film when the ghosts finally make their way to the Halloween party and go to heaven.

Recreation of the Halloween party invitation to the Tip Top Club 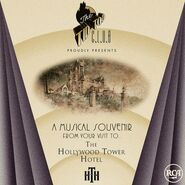