It is Halloween night, as Huey, Dewey, Louie and Webby get ready to go out and collect candy for the night. Scrooge says that they have to leave the mansion as he never hands out candy. Instead, he leaves an empty bowl that says "take one" on it; implying to treaters that they have already run out. Scrooge will head out to collect candy for himself, much to Donald and Della's dismay. Della is further annoyed when Donald tells her that they will head over to Launchpad's house instead, as she wanted to scare trick or treaters and thinks that Launchpad is too soft.

Despite Huey's intricate planning on where to go for the night, Louie insists that they head to Hazel House instead, a haunted house that rests outside Duckberg. Louie believes that it holds a lifetime supply of candy so that they will not have to trick or treat ever again. While Huey is against this, the kids all agree to head there. Donald and Della arrive at Launchpad's house and discover it is heavily fortified. Not only that, but Launchpad is convinced that he is being attacked by little monsters (trick or treaters). Donald and Della are confused by his behavior and ask for an explanation.

At the Hazel House, the kids enter and find a trail of candy wrappers. They go deeper and find a room full of creepy toys, four of which resemble wooden dummy versions of themselves. The kids are attacked by a larger dummy and flee where they encounter a clown and tentacles and arms coming out of doors. The kids make it to the door at the end of a hall, but end up outside in a graveyard. Louie insists on going back inside for the candy, but gets into a fight with Huey. When Louie looks at the map, he learns that Huey knew about the house in advance, did not want to go there, angering him.

Dewey spots a creepy well girl coming out and the monsters quickly approach them, during which, the kids yell out that they do not have any candy. The monsters suddenly stop and reveal themselves as classic monsters (the clown is a Wereduck, the puppet is Nosferatu, the well girl is Witch Hazel and the limbs belong to Frankenstein's Monster). The monsters reveal that they just wanted candy and dress up as "modern monsters" which they find humiliating and offensive. They have been scaring kids into dropping their candy so that they can claim it for themselves. When Huey learns that Halloween has ended already, Louie realizes that he messed up trying to take Huey's time away from him and putting his brothers in danger, and apologizes for not listening to him.

Launchpad claims that when he was a boy, he found a creepy house (Hazel House) and that he entered it and discovered a "piece of parchment" (candy wrapper). Upon reading the "inscription" (the ingredients), he noticed the little monsters and believed that he cursed Duckberg so that every October 31st monsters come out and he has to protect himself. Della is excited that Launchpad is taking the holiday seriously in a scary way, but Donald feels that they need to explain it to him. Scrooge then makes Launchpad's house as his next stop for trick-or-treating, but Launchpad fights him, thinking he's a monster, and then runs down the street with a sawblade to "finish" what he started. Donald and Della give chase with Scrooge also following behind.

Since, the kids do not have any candy, the monster plan to devour them. Just as the monsters gang up on the kids, Launchpad arrives and ends up scaring the monsters. They soon spot Donald and Della in their outfits and believe they are "creepy twins' and flee. Launchpad catches up with them and sees a dummy looks like Dewey. Believing him to be real and was killed by the monsters, Launchpad flies into a rage and starts furiously chasing monsters around the house. Scrooge catches up and scares the monsters. Launchpad finds the candy wrapper and reads from it to "end the curse", but the monsters find it amusing and congratulate him on scaring them. Launchpad is confused by the events and Huey and Louie decide to explain Halloween to him.

Scrooge opens his mansion for the trick or treaters, though he charges them. He further decides to leave it open all through the night like a "24 hour candy store", based on a pitch Dewey made throughout the episode. The monsters themselves also learn that the kids love their "costumes" and everyone finds a newfound appreciation for Halloween while Launchpad happily embraces the holiday. The final shot is of a black and white photo in the Hazel House that depicts everyone happily posing for Halloween. 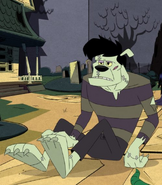 Retrieved from "https://disney.fandom.com/wiki/The_Trickening!?oldid=4431663"
Community content is available under CC-BY-SA unless otherwise noted.