Albert Aley
Gladys Bronwyn Stern (Based on the book by)

$6.2 million
The Ugly Dachshund is a 1966 Walt Disney Productions feature film starring Dean Jones and Suzanne Pleshette in a story about a Great Dane who believes he's a dachshund. Based on a 1938 novel by Gladys Bronwyn Stern, it was written by Albert Aley and directed by Norman Tokar. It was one of several light-hearted comedies produced by the Disney Studios during the 1960s. It was released theatrically on February 4, 1966.

Mark and Fran Garrison are a dog-loving couple with different tastes in canines. The story begins with their dachshund, Danke, giving birth to 3 puppies. One day, gentle veterinarian, Dr. Pruitt convinces Mark to take a runt Great Dane puppy home with him as a gift. That same day his Great Dane had a large litter of puppies and he didn't have enough milk for all of them. Mark agrees and the Great Dane, named Brutus, grows up with the tiny puppies; convinced that he's also a dachshund. His confused identity sets the stage for a number of mildly comic bits lead by the mischievous dachshunds--he chases a policeman up a tree, destroys Mark's studio with paint splattered, and ruins a garden party in a topsy-turvy way. Fran finally tells Mark that Brutus has to go, but changes her mind when he saves her favorite dachshund puppy, Chloe, from a scrap heap. Mark and Fran enter their dogs in a dog show with Brutus meeting others of his breed. He notices a female Great Dane and stands at attention. He goes on to win two blue ribbons. He finally finds out what its like to be a Great Dane. 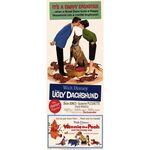