Avengers Assemble
Hulk and the Agents of S.M.A.S.H.
What If...?

Clancy Brown (Avengers Assemble and Hulk and the Agents of S.M.A.S.H.)
Jeffrey Wright (What If...?)

The Watcher from Marvel Comics

Blue Side of Moon

“I observe all that transpires here, but I do not, cannot, will not interfere. For I am... the Watcher.”
―The Watcher[src]

The Watcher (real name Uatu) is a character from the Marvel Comics that appears in the What If...? series. He is a being that lives in space and watches everything happening on various timelines of the Multiverse. He is a neutral being that acts as the objective side in conflict, so he will not actively help hero nor villain.

Uatu was created by Stan Lee and Jack Kirby.

“Time. Space. Reality. It's more than a linear path. It's a prism of endless possibility, where a single choice can branch out into infinite realities, creating alternate worlds from the ones you know. I am the Watcher. I am your guide through these vast new realities. Follow me and ponder the question... What if?”
―The Watcher's opening narration[src]

The Watcher appears as the main character of the series, voiced by Jeffrey Wright. He narrates all the episodes, and often is seen as a silhouette in space. The Watcher tells many stories about how a single choice creates a new timeline in the Multiverse where everything is different as a result. He has to maintain his role of watching the timelines without meddling in the events happening on it, even if they lead to the destruction of that universe.

In the fourth episode of the series, the Watcher observes Doctor Strange absorbing the power from other life forms to be able to break an Absolute Point in time to revive his lover Christine Palmer, and comments that Strange is on the wrong path because it will lead the end of this universe, but he adds that he still won't interfere to help him. Then, for the first time, someone is shown to notice the Watcher's presence as Strange hears this comment and turns around looking for the one speaking, but finds no one. Later, after Doctor Strange became Strange Supreme, broke the Absolute Point and brought Christine back to life, the universe starts to collapse and Strange calls the Watcher. Strange says that he read about the Watcher and felt his presence before. Strange begs him to save the universe and Christine, but the Watcher says that Strange was warned by others about the consequences of his actions, and there is nothing he can do to help. Refusing to intervene, the Watcher leaves, leaving Strange Supreme's universe to its doom.

In the eighth episode, he foretells the origin of Ultron in a universe that he manages to transfer his mind to a Vibranium body. Following this, Ultron later acquires all six Infinity Stones and destroys the worlds in his universe, bringing the "peace" he wanted. As the Watcher narrates the event of a machine that now has no purpose, Ultron overhears him and discovers that there are other universes besides his own. Terrified about Ultron having access to other realities, the Watcher observes Black Widow and Hawkeye from Ultron's universe, as they are trying to find a way to defeat the machine. As they look for information inside the KGB archives, the Watcher becomes very tempted to intervene to help Hawkeye, who is very close to find information about the AI that can fight Ultron inside a box with files. The Watcher becomes frustrated as he sees a pessimistic Hawkeye giving up and relieved when Black Widow finally finds the file regarding the AI.

As the Watcher becomes hopeful for the Multiverse, Ultron leaves his universe and confronts him, saying he now plans to destroy the entire Multiverse. The Watcher summons his golden armor and fights Ultron, breaking through many realities during their confrontation. Eventually, the Watcher retreats from the battle, falling inside a purple gem, the remains of Strange Supreme's universe. Seeing the Watcher defeated, Strange Supreme approaches him and asks if he is prepared to break his oath to not intervene with the universes. Left with no other options, the Watcher asks for his help to save the Multiverse from Ultron.

In the ninth episode, they gather the heroes from across the universe and bring them to the pub created by Strange Supreme's magic, recreated from Captain Carter's biography. With Ultron defeated and Strange Supreme trapping both Killmonger and Zola as they fight over the stones, the Watcher brings them back to Strange's pocket dimension and assigns Strange Supreme to watch over the imprisoned Killmonger and Zola, which Strange happily accepts. With their worlds saved, the Watcher brings the heroes back to their respective worlds, except Black Widow, who refuses to return to her own universe, with too much collateral damage done by Ultron. Uatu decides to bring Natasha to another universe where the world lost its mightiest heroes, with her alternate self being the victim.

The Watcher appeared in Marvel's Avengers Assemble as a cameo, where he and the Hulk were watching a baseball game.

Uatu the Watcher in Hulk and the Agents of S.M.A.S.H. 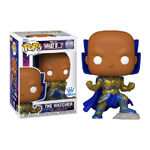 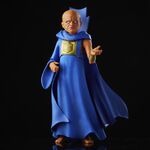