The Weekenders was a Disney animated series about the weekend life of four diverse misfit 7th graders in middle school: Tino Tonitini, Lor McQuarrie, Carver Descartes, and Tish Katsufrakis, voiced by veteran cartoon voice-actors Jason Marsden, Grey DeLisle, Phil LaMarr, and Kath Soucie, respectively. It is stated at least once that the four main characters are each twelve years old. The setting is the fictional town of Bahia Bay, California. The show was created by Doug Langdale, who later created the Disney Channel animated series Dave the Barbarian. The theme song was performed by Wayne Brady. The show lasted from February 26, 2000 to February 29, 2004 for 4 seasons and 76 episodes.

Each episode takes place during the weekend. Friday usually sets up the conflict for the episode, Saturday escalates or develops it, and the climactic third act is usually what happens on Sunday. The implied "ticking clock" is used to signify that the problem must be solved before school on Monday. Unlike most children's cartoons and teenager's television programs, The Weekenders rarely touches upon the aspects of school life. Furthermore, because it is the weekend, the characters are not supposed to be in school, and thus they are allowed to partake in activities that are not school-related (such as playing arcade games) without a logical error. Disney's Recess chose to set the episodes during the school's designated hour of playtime for a similar effect. (It should be noted, however, that in The Weekenders, homework is occasionally the instigator of conflict, making some episodes related to the characters' academic lives.) The episodes either tell one story for the full-time duration (as in "Nevermore," a Halloween special) or two stories that each take up half of the episode. Although most of the episodes are told from the character Tino's point of view, making him in a way the main protagonist, the episodes can and do center around the other three. Similarly, although Tino frequently provides an introductory greeting and exposition, à la Greek chorus, the other characters sometimes make the episode's conclusion or will step in for Tino to make the introduction. When this happens at any time, the fourth wall is broken. The main characters seem to be fully aware of the audience and the fact that The Weekenders is a cartoon in production, as when Tino says "Okay, next scene!" or harshly ordering to "Go to Sunday!" or that certain phrases are not allowed by television censors.

The series, created by Doug Langdale, made its debut in 2000 as a part of Disney's One Saturday Morning on ABC and later on Disney's One Too on Sunday mornings. Later it moved to cable channel Toon Disney and aired on The Disney Channel for a short time. In Canada, it was shown on the Family Channel three times a day on weekdays.[2] In the UK, Disney Channel began airing the show exclusively on Friday afternoons, Saturdays and Sunday mornings to fit in with the basic premise (the Latin American version of Disney Channel did the same when airing the show).

The show became popular because of its distinctive animation style, and character movements were fluid. One of the points of deliberate humor by the animation was that the eyes on each character were far apart, similar perhaps to the Nicktoon, Rocket Power.

The show's title theme (performed by Wayne Brady) was written by both Brady and Roger Neill. TV Guide dubbed The Weekenders as "the show that killed Pokémon," because ABC stole the ratings when they aired it at 10:00 am - the same time Pokémon aired on Kids' WB. The Weekenders last aired on Toon Disney in 2008.It is now airing on the Jamaican TV station Television Jamaica (TV). 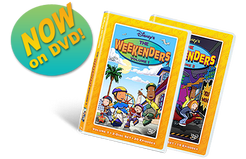 The entire show is now available on DVD on two volume sets sold exclusively through the Disney Movie Club. Volume One includes the first 20 episodes while Volume Two covers the final 19 episodes, making The Weekenders the first Disney TV Animation show to be fully released onto DVD. Each volume are showing a $19.99 price and are available for pre-order on the Disney Movie Club website from February 5, 2013. This marks the first time a television show from Disney's One Saturday Morning is given a full DVD release.

Tino Tonitini (voiced by Jason Marsden) is the de-facto lead character of the series. He frequently begins each episode by breaking the fourth wall, introducing himself, and describing the situation at hand. As conflict develops during the episode, he usually asks his mother for advice. Of the four main characters, Tino is considered by his friends to be the most neurotic and weird, making his behavior the butt of many jokes. He has an irrational fear of clowns, but is able to develop a certain degree of tolerance towards them. He is also an amateur conspiracy theorist and makes obscure references to things that are bizarre, such as bats being able to breathe underwater. Though he often does things that are considered dorky, such as playing air guitar or laughing maniacally, he has the capacity for intelligent wit and will make remarks that are subtly sarcastic. Tino usually wraps up the episode by stopping after his friends have walked off, turning the camera, and stating the moral of the story. His trademark catchphrase, often delivered as his last line bidding farewell, is "Later days!"

Lor MacQuarrie (voiced by Grey DeLisle) is a tomboy and the "jock" of the group. She has shoulder-length strawberry-blonde hair and often wears T-shirts and jeans. She is of Irish and Scottish descent and has over fourteen brothers. She also is confident and assertive. Lor is an avid sports player, and she excels at both basketball and soccer. She is frequently caricatured as the "dumb jock," as many of the jokes revolve around her stupidity. Lor is frequently tough, spoiled, snarky, and borderline insensitive, to the group's chagrin. She mock-threatens violence ("I'm going to pound you one!") when she is either offended or upset. Lor also enjoys eating junk food and finds more in common with the guys, Tino and Carver, than with Tish. However, Lor is unable to speak coherently to boys she likes and has a crush on Thompson Oberman, a boy at school who has blue hair and wears sunglasses. She struggles in school but can earn a decent grade when she sets her mind to it. Lor's hero is her grandmother.

Carver René Descartes (voiced by Phil LaMarr) is the self-proclaimed "cool guy" of the group. He is an African American and has a strong interest in clothes and fashion (particularly shoes). Although he appreciates spending time with his friends, Carver desperately wants to be one of the cool kids and, ultimately, to become a celebrity. He is shown to be somewhat self-centered and can be immensely shallow and superficial: he once rejected a girl simply because she was too tall. Thus the more touching moments of the show are when he is altruistic and battles his own insecurity. One of the many recurring jokes about Carver is that he secretly owns and tries on women's clothing. However, he usually (albeit nervously) responds that the clothing is his sister's. Carver also has a younger brother named Todd, a toddler stuck in his terrible twos, who occasionally torments Carver and, by extension, his friends. He goes to his sister, Penny, for advice, but she frequently disregards his questions. Carver's head is often compared to a pineapple for humorous effect. Carver is sometimes noted for his horrible handwriting, which often leads to people reading words much different from his intentions.

Petratishkovna "Tish" Katsufrakis (voiced by Kath Soucie) is the intellectual of the group. She has medium-length auburn hair, wears glasses, and dresses conservatively. She is also the most considerate of the four, as she frequently points out what is and is not offensive, and cares about people's feelings. Tish is very intelligent being a straight-A student, but has received at least one "B" grade, which surprised everyone and Tish herself. As seen in the episode, "Brain Dead," the main focus of the story is how Tish and her friends react to her getting a "B." She is also a perfectionist and a vegetarian. Tish enjoys reading, classical music, art, and solving math problems in her head during her free time. She also greatly admires William Shakespeare. Tish considers herself the most cultured of the four, and she often attempts to convince her friends to participate in high-society activities, such as visiting the museum or an art show. Although it is never stated which country her family comes from, it is implied that she is of Eastern European descent and both of her parents are immigrants to the United States. Her name, "Tish," is short for Petratishkovna—which, according to her parents, means "girl with one nose." As seen in the episode, "Brain Dead," when Tish's parents describe how they named her. She is also allergic to guavas.