From Up on Poppy Hill

The Tale of the Princess Kaguya
The Wind Rises (風立ちぬ, Kaze Tachinu?) is a 2013 Japanese animated historical fantasy film written and directed by Hayao Miyazaki. The film is based on the manga of the same name, which is in turn based on a short story by Tatsuo Hori, a writer, poet and translator from mid-20th century (Showa period) Japan. Kaze Tachinu is a fictionalised biography of Jiro Horikoshi, designer of the Mitsubishi A5M (featured in the movie) and its famous successor, the Mitsubishi A6M Zero. Both were fighter aircraft that the Empire of Japan used in World War II. Miyazaki said this would be his final full-length film.

The Wind Rises is a movie based on a real historical figure in Japanese history, Jiro Horikoshi, who was responsible for creating the infamous "Zero" fighter during the first years of World War 2. In the movie, Jiro starts out as a young boy living in a provincial town in Japan, who dreams of a day when he could design and possibly fly airplanes. However, much to his dismay, his eye-sight deteriorates rapidly, preventing Jiro from ever piloting an aircraft. His hopeless longing even leads to dreams where he would fall from an airplane he was piloting, as his eyes could not withstand the pressure of high altitudes. Desperate to find a way to overcome his weakness and follow his goal, he seeks help and guidance from Giovanni Caproni, a famous Italian aircraft designer who appears to Jiro in his dreams. Caproni encourages Jiro to become an areonautical engineer, as he could then follow his desire to design airplanes without actually having to fly one.

Determined to become an aeronautical engineer one day, Jiro studies the principles of aviation throughout his academic years, continuously seeking guidance and encouragement from Caproni along the way. By the time he is an adult, he is able to enter the University of Tokyo to study aeronautics. Boarding a train, he makes his way to the Kanto region of Japan. During the journey, he meets Naoko, a young girl traveling with her maid, for the first time. An unprecedented, deadly earthquake suddenly hits the Kanto region, leaving the city in devastation and fire. The passengers inside the train flee from the train, as the damaged boiler threatens to explode. As Jiro starts to leave, he notices that Naoko's maid had broken her leg during the commotion caused by the earthquake. Strapping his slide-ruler to the side of her leg, Jiro leads both Naoko and her maid to safety. Jiro's actions win affection and gratefulness from Naoko and her maid, but they can not express their thankfulness to him, as Jiro leaves without telling them who he is.

Years later, Jiro works as an aircraft manufacturer and designer for a company in Nagoya, Japan. His first assignment to build a fighter with a design team ends in failure, and the company is forced to give up its contract to a rival company. Redirecting its attention to the designing of a heavy bomber, the company sends Jiro to Germany to study the technical advances of the German Junker aircraft designs. Jiro, with difficulty, succeeds in procuring the necessary designs from the grudging Germans and returns to Japan. Some years later, Jiro is reassigned to a fighter project funded by the Imperial Japanese Navy as the design team's chief designer. This project also ends in failure, causing Jiro to fall into a state of severe disappointment. The company, anxious to have their chief designer back in form, sends Jiro away to a summer resort to recover. There, he meets Naoko once again, now grown into a beautiful young woman. The two soon fall in love, sharing a passionate romance. However, when Jiro proposes to Naoko, she refuses, saying that she was inflicted with tuberculosis. She earnestly entreats Jiro to wait for their marriage until she is cured, which Jiro gently accepts.

Jiro returns to the company after his vacation time expires. He is then assigned to another fighter project sponsored by the Navy as the chief aircraft designer. In order to avoid the attention of the Japanese secret police, the company sets Jiro's lodgings at one of his supervisor's residences. With the help of his design ream, Jiro plans the construction of Japan's future naval fighter, regarding it as a revolutionary step in aeronautics.

Meanwhile, Naoko's health deteriorates rapidly, eventually causing her to have a lung hemorrhage, much to Jiro's dismay. To receive treatment, she journeys to a sanatorium in the mountains where she stays for a long period of time. However, Naoko can not bear to be apart from Jiro. Furthermore, she senses that her end is near. Thus, she journeys to Nagoya to see Jiro one last time. The couple requests a traditional marriage from Jiro's host, and they spend a brief, yet happy time together despite the dire warnings given by Jiro's sister about Naoko's possibly horrific impending death.

Jiro eventually completes his fighter design, building the Mitsubishi A5M. Before he leaves to spend the next few nights at the site of the test flight, he and Naoko share their last moment together. While he is at the site, Naoko leaves Nagoya, intending to go back to the sanatorium. She knows that she is going to die, and does not wish Jiro to witness the last terrible moments of her life as she succumbs to the disease.

The test flight goes well. Jiro and his superiors watch as a naval pilot flies the new aircraft to astonishing speeds of 240 knots, a groundbreaking record in flight speeds during that time. As Jiro proudly watches his creation touch down onto the ground, he feels a strong gust of wind from the distant mountains. As he stands against the wind, he senses Naoko's death, leaving him in stunned, anxious suspense.

After World War 2 is over, Jiro revisits his dreams as he did several times in his life, to meet Caproni for, possibly, the last time. Jiro expresses his regret and sorrow of the destruction and devastation his "Zero" fighter had caused during the war. Caproni comforts him, saying that "his dream was nonetheless realized" and that airplanes "were beautiful, cursed dreams". Caproni then directs Jiro's attention beyond the grassy hill they were standing on. Jiro, stunned with joy, sees Naoko coming towards him, holding a parasol in her hand. Waving to Jiro, she calls to him, "you must live, darling...you must live!" Jiro, barely able to speak, nods his head. Her last message complete, she rises with the wind sweeping the grassy landscape they are all in, vanishing from sight. Continuing his walk with Caproni, Jiro looks to the sky and the wind, taking his wife's words deeply to heart.

The Wind Rises is directed by Hayao Miyazaki, whose previous works include notable films such as My Neighbor Totoro and Spirited Away. It is the first film that Miyazaki has solely directed in five years; his last work was the 2008 film Ponyo. This film is based on a manga by Hayao Miyazaki, which was serialized in the monthly magazine Model Graphix in 2009. The story of the manga is in turn loosely based on Tatsuo Hori's short novel "The Wind Has Risen", written in 1936–1937. Although the story in the film follows the historical account of Horikoshi's aircraft development chronologically, the rendition of his private life is entirely fictional.

Miyazaki was inspired to make the film after reading this quote from Horikoshi: "All I wanted to do was to make something beautiful."

The singer-songwriter Yumi Matsutoya's 1973 song "Hikōki-gumo" (ひこうき雲?) is used as the film's theme song. The protagonist Jirō Horikoshi is voiced by Hideaki Anno.

The Wind Rises was to be released simultaneously with Kaguya-hime no Monogatari, another Studio Ghibli film by Isao Takahata in Japan in the Summer of 2013. This would have been the first time that the works of the two directors were released together since the release of the films My Neighbor Totoro and Grave of the Fireflies in 1988. However, Kaguya-hime has been delayed until Q3 2013. The Wind Rises was released on July 20, 2013.

Walt Disney Studios Motion Pictures distributed the film in North America through its Touchstone Pictures label. Disney had a one-week release window in the Los Angeles theatrical circuit for the film beginning on November 8, 2013, so that it can qualify for Academy Awards consideration. The film was given a wide release on February 21, 2014.

On release in Japan, the film received criticism from both the political left and right, as well as from an anti-smoking group. Miyazaki himself added to the controversy by publishing an article in which he criticized Japan's conservative party's proposed changes to the constitution, which irritated nationalists. Leftists were unhappy that a war-plane designer was the film's protagonist. Some questioned why Miyazaki would make a film about a man who "built killing machines", and others pointed out that some of the laborers who built the planes were Korean and Chinese people who were forced into labor. The film has also received criticism from the South Korean public.

In an interview with the Asahi Shimbun, Miyazaki said he had "very complex feelings" about the war, but regarding the Zero, he said it "represented one of the few things we Japanese could be proud of – they were a truly formidable presence, and so were the pilots who flew them."

The Japan Times gave the film a 3 1/2 stars out of 5, and states "So, yes, The Wind Rises is an old-fashioned tearjerker, but it is also a visually sumptuous celebration of an unspoiled prewar Japan." In a review for The Asia-Pacific Journal, Matthew Penney wrote "What Miyazaki offers is a layered look at how Horikoshi's passion for flight was captured by capital and militarism," and "(the film) is one of Miyazaki's most ambitious and thought-provoking visions as well as one of his most beautifully realized visual projects."

A common misconception (as evident in the aforementioned review by Matthew Penney) is to think that the prototype Jiro is developing in the latter half of film is for the Zero, when it is actually a prototype of the Type 96 Fighter, the predecessor of the Zero. 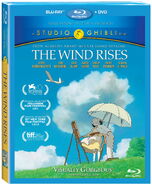