The World That Never Was

The World That Never Was is an abyssal world with a perpetually night-time atmosphere. Among the ground, several buildings rise to form the Dark City, giving the world an urban setting and lighting. Overhead the Dark City is the Castle that Never Was, where Organization XIII operates. The artificial Kingdom Hearts floats in the sky acting as the moon. The World That Never Was is very close to the darkness of Kingdom Hearts, allowing Heartless to flourish here.

Main article: Castle That Never Was

Artwork of the Castle That Never Was 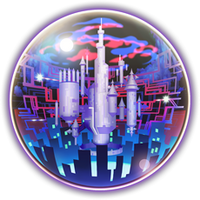 Add a photo to this gallery
Retrieved from "https://disney.fandom.com/wiki/The_World_That_Never_Was?oldid=3430028"
Community content is available under CC-BY-SA unless otherwise noted.