The World of Cars Online allowed users to customize their own car, chat with other players, decorate their own yard, race against friends, and complete different quests with all of their favorite movie characters. There were also different mini games to earn coins such as Mater's Tractor Tipping. As users explored and played games they earned badges such as a Tractor Tipping Badge. The website also hinted that it might be possible to be other vehicles like trains and fire trucks .

Racing was a main component of the World of Cars Online. Besides racing for different quests against computer players, users were able to participate in multi-player racing against friends. Hazards were used to slow down other players behind you. Examples of Hazards would be an oil spill and a hay bale. Different Hazards were available to obtain from Sarge.

The World of Cars Online is was closed on February 8, 2012, just 9 days after another MMOG, LEGO Universe, closed. Disney is expected to refund up to $8,000 in membership fees that cannot be concluded with game time.

The game never picked up as much as other Disney MMORPG's. The total member count was about 60,000. The majority of those members are inactive and unpaid. Many gamers began playing during Open Beta and left once payment was required to continue.

Many miss World of Cars Online. But, some people have asked, "Will you make a World of Cars 2?" Sadly, Disney said that they wouldn't, and that they recommend users to go to the official cars website. 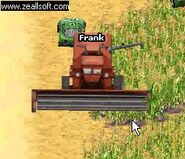 Sarge
Add a photo to this gallery

Retrieved from "https://disney.fandom.com/wiki/The_World_of_Cars_Online?oldid=1174533"
Community content is available under CC-BY-SA unless otherwise noted.