"It's clobberin' time!"
The Thing is a Marvel Comics character who is a superhero with tanned rock-like skin and brute strength. He is a member of the Fantastic Four.

He is voiced by Fred Tatasciore in The Avengers: Earth's Mightiest Heroes, and by Dave Boat in Ultimate Spider-Man and Hulk and the Agents of S.M.A.S.H.

The Thing was created by Stan Lee and Jack Kirby.

The Thing first appears along with Human Torch to help the Avengers fight ice monsters when Malekith the Accursed creates a dangerous winter in New York. He returns alongside the rest of the Fantastic Four in the episode "The Private War of Doctor Doom". He and Hulk have a somewhat childish rivalry because Thing never beat him in a fight. He joins the New Avengers in the episode of the same name after the regular Avengers are trapped by Kang the Conqueror. Thing and the Fantastic Four assist the Avengers while battling Galactus and his heralds in the season 2 finale "Avengers Assemble".

Thing was seen from Spider-Man's imagination about his early encounter with Trapster who stuck the web-head with him.

When Spider-Man, mind-switched into Hulk's body by Mesmero, ends up in town, he is attacked by Thing, who was summoned by Nick Fury to try and contain the Hulk. Spider-Man, Hulk (who is in Spider-Man's body), and Thing eventually clear things up, corner Mesmero and force him to switch Spider-Man and Hulk's minds back. 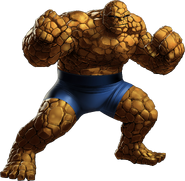 The Thing from Marvel: Avengers Alliance
Add a photo to this gallery

Retrieved from "https://disney.fandom.com/wiki/Thing?oldid=3884502"
Community content is available under CC-BY-SA unless otherwise noted.