Sangster was born in London. He lives with his sister, Ava, and his parents, actors Anastasia "Tasha" Bertram and Mark Ernest Sangster. His father, who is also a musician and film editor, starred in the musical adaptation of The Lion King in Germany. Sangster is the second cousin once removed of actor Hugh Grant, alongside whom he appeared in Love Actually; his great-grandmother, Barbara Bertram, and Grant's grandmother were sisters. Sangster's great-grandfather, Anthony Bertram, was a novelist.

Sangster plays the bass guitar, and he learned to play left-handed in order to portray the left-handed Paul McCartney in the feature film, Nowhere Boy. His other film credits include the mischievous Simon in the Universal film, Nanny McPhee.

Notable roles outside of Disney include Love Actually, Nanny McPhee, The Maze Runner, and as John Tracy on the CITV series Thunderbirds Are Go, and as Benny Watts in The Queen's Gambit 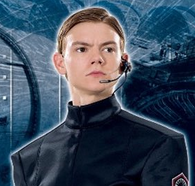