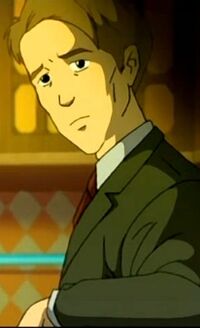 Thomas​ Brown/Alborn (voiced by Mark L. Taylor) is Elyon's adopted father, a Meridianite who raised her in Earth to hide her from Phobos. His real name is Alborn, and he is head of the Meridian army and currently lives with Elyon in her palace in Meridian. In the second season, he becomes Head of the Royal Guard. Before Elyon returned to power, he was captured and put in Cavigor Prison to be freed by the Guardians.

Using the alias Thomas and Eleanor Brown, Alborn and his wife Miriadel raised Elyon until he was fooled by Cedric to cross the Veil into Meridian. He was taken captive and jailed in Cavigor until rescued by the Guardians.

After the defeat of Phobos, Alborn took care of Elyon in the Meridian Castle during her reign as queen.