Oliver
Thomas Patrick Lennon is an American actor, voice actor, comedian, screenwriter, producer, and director. He is known for his roles as Lieutenant Jim Dangle on the Comedy Central series Reno 911! and as Felix Unger on the CBS comedy sitcom The Odd Couple. He frequently collaborates with Robert Ben Garant when screenwriting and producing films such as the Night at the Museum trilogy, Balls of Fury, and Hot Tub Time Machine.

For Disney, he voiced the character Atlas in Hercules: The Animated Series, a landlord in The Legend of Tarzan, Henry in Milo Murphy's Law, Scribble in Tinker Bell and the Legend of the NeverBeast and Secret of the Wings, and Clinton Coot in Legend of the Three Caballeros. He also played Eric Montclare in Out Cold, Freddy Morris in For The People, and Larry Murphy in Herbie: Fully Loaded of which he was also a writer for. He was also a writer for The Pacifier.

Thomas Lennon with his wife, Jenny Robertson and his son, Oliver at Finding Dory premiere in June 2016. 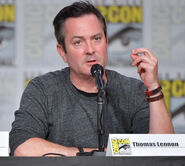 Thomas Lennon speaks at the 2019 San Diego Comic Con.
Add a photo to this gallery
Retrieved from "https://disney.fandom.com/wiki/Thomas_Lennon?oldid=3902094"
Community content is available under CC-BY-SA unless otherwise noted.