Mollie Gates (2015-present)
Thomas Steven Middleditch is a Canadian actor, voice actor, comedian, and screenwriter. He is best known for his role as Richard Hendricks in the HBO series Silicon Valley. He also voiced Harold Hutchins in the 2017 DreamWorks' adaptation of Capitan Underpants: The First Epic Movie.

For Disney, he voices Penn Zero in the Disney XD animated series, Penn Zero: Part-Time Hero, Donny Tinselton and Bash in Big City Greens, and Garnoz in Phineas and Ferb the Movie: Candace Against the Universe.

Bash
(Big City Greens)
Add a photo to this gallery

Thomas Middleditch at premiere of Fun Size in October 2012. 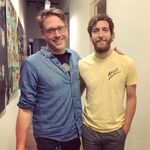 Thomas Middleditch attending the 70th Annual Emmy Awards in September 2018.
Add a photo to this gallery

Retrieved from "https://disney.fandom.com/wiki/Thomas_Middleditch?oldid=4155552"
Community content is available under CC-BY-SA unless otherwise noted.