The Wonderful World of Disney
"Three on the Run"

Two young brothers form an unlikely team of dogs so that they can compete in a prestigious local sled team race.

With the help of their grandfather (Denver Pyle), brothers Steve and Scott Tanner (Donald Williams and Brett McGuire) enter their town's annual sled dog race. When he was young, their deceased father had been a three-time champion of the competition, which has been dominated in recent years by smart-aleck Lee Roy Norris (D. Kenton Brine). The Tanner brothers are determined to change that but their choice of dogs leaves a lot to be desired. There is a lazy white German Shepherd, a doughnut-loving Bloodhound and a skittish English Sheepdog. But through intense training and against all the odds, they manage to create what they feel is a competitive team. As the race gets underway, their speed is sluggish -- good enough only for last place. But thanks to a grizzly bear that is awaken from hibernation, the unlikely dog trio forges ahead and passes Leroy to a triumphant win! Co-starring as friendly ranger Harley Townsend is Ron Brown, who played similar roles in a few other Disney productions, most notably the 1967 feature Charlie, the Lonesome Cougar. Davey Davison plays the boys' skeptical mother. Denver Pyle was already familiar to Disney fans as Uncle Bene in the classic movies Escape to Witch Mountain (1975) and Return from Witch Mountain, released a few months after "Three on the Run" aired. He would go on to his best know and beloved role as kindly Uncle Jesse on The Dukes of Hazzard, which ran from 1979 to 1985.

Once again the orchestrations are handled by Buddy Baker. A few scenes feature his distinctive "bear" music: a deep horn played a little slow. It may be difficult to accurately describe in print. But it's a recognizable sound because it was used often in Disney nature shows in which Baker scored the music. It is very easy to become caught up with the music in this story especially during the finale's great sled dog race. In fact, this may have been the episode's original title, being chanced to the less clichéd "Three on the Run" shortly before its air date. On the December 25, 1977 broadcast of "From All of Us to All of You" (one of the all-time classic episodes, which aired nine times during the anthology's original run), this episode is previewed in a clever rhyme narration by announcer Dick Tufeld:

Even though "Three on the Run" aired only one time on network television, later Disney Channel repeats solidified this show as a favorite. Not only is this a good story, but the white German Shepherd has sentimental value. Growing up, we had a German Shepherd who looked exactly like the one in this show. Bullet was a smart, gentle dog who was a part of our family for 13 years. No doubt the night of its original broadcast, we had to be watching and commenting about "Bullet" being on TV!

Over the past 50 years, not too many episodes could be categorized as being really truly awful. That's rather impressive for such a long run. There is one episode that is submitted as being downright bad. It is unfortunate because it is about Walt Disney World. 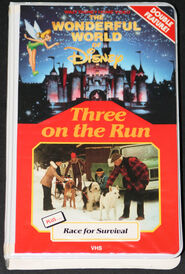 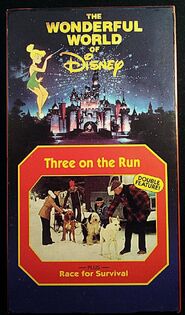 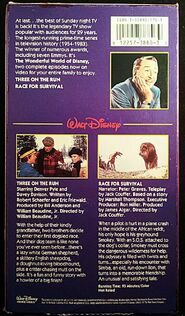 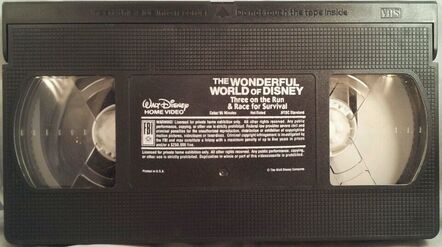 Add a photo to this gallery
Retrieved from "https://disney.fandom.com/wiki/Three_on_the_Run?oldid=3796142"
Community content is available under CC-BY-SA unless otherwise noted.