Under a tree in the forest

Thumper playing with them

Thumper not playing with them, Man

Miss Bunny (sister-in-law)
Thumper's daughters (nieces)
Roger Rabbit (nephew)
Jessica Rabbit (niece-in-law)
Thumper's sisters are cream colored rabbits, who are related to Thumper. They live in the forest with Thumper and friends. They are very playful and are always looking for Thumper, which in turn bothers him. But, like any sibling, they always find their way to the true meaning of family.

Like their mother, Mrs. Hare, they are cream-colored bunnies with white cheeks and undersides. They like to sing as shown in Bambi II. They are very playful when around their big brother Thumper, who always tries to hide from them.

With their Brother Thumper 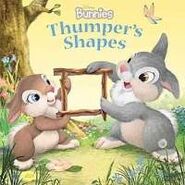 Ria In the storybook Thumper's Shapes 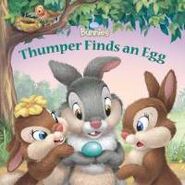 Daisy and Trixie In the Storybook Thumper Finds an Egg 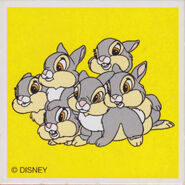 Thumper with 5 sisters on a memory game card. 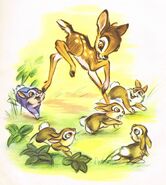