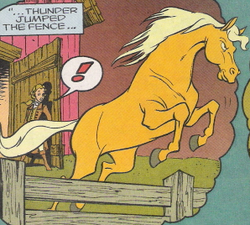 Thunder was an Arabian horse that appeared in the Beauty and the Beast comic series. It formerly belonged to the prince as a child.

Thunder was originally Prince Adam's pet horse as a child. However, though he frequently rode it, he never gave it any love and compassion. Frequently just riding it then just resting near a tree. One day, the Prince was about to ride the horse as usual, but Thunder, evidentially having had enough of his loveless existence under the Prince, took the opportunity to escape into the forest. Even though the Prince ordered for his soldiers to retrieve the horse, they never found it. The Prince deep down proceeded to miss the horse, and presumably regretted his treatment of it. It was rumored to have been found by an enchantress and ridden as her horse, and proceeded to be supplied with love and affection. Mrs. Potts and the other servants relayed this story when expressing doubts about the Prince, by that point turned into the Beast, being capable of redemption.

Retrieved from "https://disney.fandom.com/wiki/Thunder?oldid=3865701"
Community content is available under CC-BY-SA unless otherwise noted.