“Either airplane designs are getting uglier, or it's that duck!”
―Taurus Bulba seeing the Thunderquack flying around his ship

The Thunderquack is Darkwing Duck's second major mode of transportation. Anywhere he can't get in the Ratcatcher motorcycle, he gets in the Thunderquack. It's often used for airborne patrols of St. Canard as well as a means of global transport.

The Thunderquack was originally built by Launchpad McQuack, as an homage to Darkwing Duck before he'd ever met the mighty masked mallard. It first appeared in the second half of "Darkly Dawns the Duck", though it is referenced in the first half when Launchpad tries to convince Darkwing not to take the biplane because he has something much better in the next hangar over. And is it ever resilient! Despite being crashed by Launchpad on virtually every landing, the Thunderquack just keeps coming back for more.

Befitting Launchpad's unique skillset, the Thunderquack has some truly unique features. Its in-flight maneuverability is unparalleled, able even to outfly living birds of prey such as Tantalus the condor. The TQ can also hover motionless and accelerate vertically like a helicopter or harrier jet. The Thunderquack is also notable for its incredibly quiet ride, as people can have conversations within feet of its running engines with little difficulty.

In addition, it has a generous interior, with two front seats for pilot and observer (usually Launchpad and Darkwing) and a rear bench which seems to be capable of seating up to six. The canopy can be opened in flight without apparent risk of structural damage as well, making it an ideal vehicle for mid-air rescue.

The TQ is also unique in having a powerful onboard computer. At one point it was so powerful that Darkwing Duck attempted to back up his entire crime database to it, to be accessed on the go. While this may technically have been possible, a malfunction resulted in Launchpad swapping personalities with Gosalyn and Honker.

While the Thunderquack lacks any true offensive weaponry such as guns or missiles, it is not without teeth. Literally, the beak-like nose of the TQ can open up to bite a target, or to reveal an internal bay from which heavy items like a grappling hook or the Hoverquack assault chair can be deployed. It is also outfitted with search lights and tricycle landing gear. (even though Launchpad rarely finds a use for the latter) 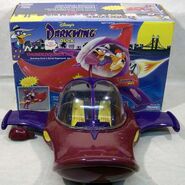 Early concept
Add a photo to this gallery

Retrieved from "https://disney.fandom.com/wiki/Thunderquack?oldid=4041758"
Community content is available under CC-BY-SA unless otherwise noted.